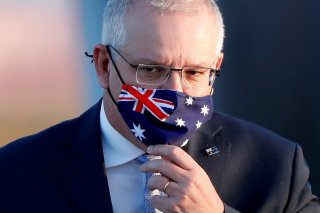 Australia’s efforts to end a diplomatic deep freeze with China may not be getting anywhere fast on the surface, but there are nonetheless some signs of a potential thaw.

China’s announcement it was “actively studying” joining a region-wide trade pact that involves Australia and ten other Asia-Pacific trading nations should be exploited by Canberra in its efforts to open lines of communication with Beijing.

Beijing has said it wants to engage CPTPP members on technical issues.

Australia would have nothing to lose by encouraging China to explore opportunities provided by a trade agreement from which China was excluded when the TPP was concluded in 2016.

The TPP, as originally envisaged minus China, was to be the cornerstone of then US President Barack Obama’s pivot to Asia. Among its aims was to provide a trading counterweight to China.

That was five years ago, before Donald Trump wilfully upended useful initiatives undertaken by his predecessor. The TPP was one of these.

The new Biden administration in the US has indicated it will study the possibility of returning to the CPTPP. However, given domestic pressures from both left and right over threats to American jobs posed by free trade initiatives, it is hard to envisage the administration moving quickly.

In the meantime, Canberra should not await Washington’s imprimatur to engage China on an expansion of the CPTPP, if that is possible.

It is conceivable Beijing is saying it wants to engage as a device to further unsettle the US and its allies in Asia. But there are also reasons to believe it would suit China to join the CPTPP club.

These reasons would include Beijing’s desire to counter fallout from a difficult 2020 for itself diplomatically on issues like the origins of the coronavirus.

President Xi Jinping indicated late last year that China would actively consider participating in the CPTPP. This was days after China signed on to the world’s largest trade pact, the Regional Comprehensive Economic Partnership (RCEP).

RCEP countries account for about 30% of global GDP, the North American Free Trade Agreement (NAFTA) 28% and the EU 15%. CPTPP countries represent 13%. These are approximate numbers.

At this point it might be useful to define differences between the CPTPP and the RCEP. These are part of an “alphabet soup” of regional trading initiatives, including an omnibus Free Trade Agreement of Asia-Pacific (FTAAP) that China has promoted over the years.

The FTAAP has been relegated to the back-burner for the time being.

The essential difference between the massive RCEP and the smaller CPTPP is that the latter aims for the virtual elimination of tariffs (up to 99%) among its signatories. The RCEP, on the other hand, imposes less stringent standards on its participants on tariffs, and on labor and environmental standards.

CPTPP signatories include Australia, Canada, Brunei, Japan, Malaysia, New Zealand, Singapore, Vietnam, Mexico, Chile and Peru. As originally envisaged, the TPP, with America’s participation, would have constituted the world’s biggest trade pact. It would have accounted for 40% of global GDP.

India dropped out citing concerns about the trade pact’s impact on certain sectors of its economy, principally agriculture. Small farmers are a vocal and powerful force in Indian politics.

It is against this background that Australia officials should redouble their efforts to engage in region-wide trade diplomacy that will bring benefits to participating economies and help stabilise a region in danger of being destabilised by China’s rise.

In the often-used words of Chinese diplomacy, this should be a “win-win” for Australian diplomacy if China’s proclaimed desire to engage in the CPTPP is something more than a diplomatic ruse.

This is at a time when Beijing finds itself under pressure over issues like its expansion of military features in the South China Sea, its human rights abuses of the Uighurs in Xinjiang, and its flouting of agreed principles to preserve Hong Kong’s autonomy within a “one country, two systems” framework.

Beijing itself has not hidden one of its principal motivations for wanting to join the CPTPP. This is to enable better relations with an incoming American administration.

With the incoming Biden administration now on the horizon, China has decided the ‘strategic time’ is now right to actively consider joining the CPTPP.

It is also noteworthy that the CPTPP is attracting interest beyond the region.

Having clumsily departed the European Union, the United Kingdom has signalled it will apply to join the CPTPP. This follows the UK’s successful application to be included as an ASEAN dialogue partner, along with Australia, the EU, Russia, US, China, Japan, South Korea and India.

In other words, trade diplomacy is continuing to tilt towards the Indo-Pacific region. This is something the Australian government should exploit in the national interest.

Meanwhile, a trade and diplomatic conflict between Canberra and Beijing accompanied by a rash of Australian complaints about China to the World Trade Organisation rumbles on to neither’s advantage. This dispute, played out in trade, is having a detrimental effect on Australia’s economic growth prospects as well as China’s access at a reasonable price to high-quality Australian commodities such as coal.

Surging iron ore prices might have disguised the economic fallout for Australia in the latest trade figures, but this will not last. Australian exporters of coal, wine, lumber, lobsters, beef, wool, barley and other commodities are paying a price for Canberra’s poor management of the China relationship.

Beijing is far from blameless in all of this, of course. A possible off-ramp, though, may well lie in some creative trade diplomacy offered by a possible reset in US relations.

Australia needs to define a role for itself that separates it from what is happening between Beijing and Washington. Smart trade diplomacy, in contrast to a plodding, joined-at-the-hip-to-the-US approach, is required.

China’s interest in engaging on a broader trade front may well provide such an opportunity.