Why China's Missile Capabilities Should Terrify the U.S. Military 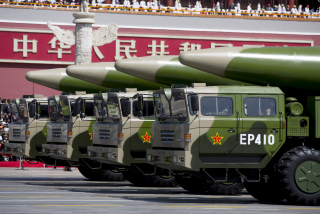 Here's What You Need to Remember: In moving a dozen DF-26 launchers to Inner Mongolia, around 2,000 miles from the Paracels, China reportedly aims to protect the rockets from boost-phase interception.

David Axe serves as Defense Editor of the National Interest. He is the author of the graphic novels  War Fix, War Is Boring and Machete Squad. This first appeared two years ago.