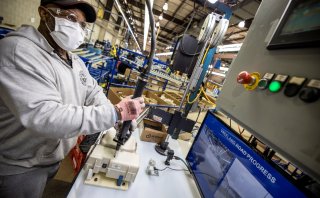 Severe shortages of critical medical supplies have prompted governments to compel private companies to fill the gap. In the U.S., President Donald Trump invoked rarely used powers to force General Motors to make ventilators, while the leaders of France, the U.K. and Japan have put pressure on companies to make more medical supplies.

But, judging by how many non-medical companies have voluntarily stepped up to shift their manufacturing might to produce health care supplies – including GM rival Ford – it seems hardly necessary.

Fashion brands such as LVMH, Chanel and L’Oreal are transforming their factories to mass produce face masks. Spirit and beer makers Anheuser-Busch, Diageo, Molson Coors and Bacardi are shifting some of their production and distribution towards hand sanitizer. And automakers Toyota, Volkswagen and Fiat Chrysler are leveraging their 3D printing capabilities to produce face shields and are partnering with other companies to make ventilators.

And that’s just three industries. In all, hundreds of companies across the globe have committed money, supplies and know-how to help with the COVID-19 response, according to the U.S. Chamber of Commerce Foundation’s corporate aid tracker.

Why are these companies being so generous?

As scholars of corporate social responsibility, we believe altruism certainly plays a role for many of them, but it’s not the only motivator. Research on company behavior points to two others: bolstering reputation and avoiding regulation.

In normal times, companies often undertake socially responsible initiatives to enhance their brand and build a stronger relationship with consumers, investors and employees in order to drive profits.

What’s a socially responsible initiative? There are many definitions, but the way scholars like us think of it is it means taking voluntary action that is not prescribed by law or not necessary to comply with a regulation.

Reputation Institute, a management consultancy, found that people’s willingness to buy, recommend, work for or invest in a company is significantly influenced by their perceptions of its corporate social responsibility practices. So doing something that benefits people in their community can lead to higher sales, increase the company’s valuation and keep good employees around longer.

But these are anything but normal times. Rather, it is a global crisis that has created a need for an all hands on deck response from everyone, including corporate America. In other words, just like during natural disasters, people expect companies to do their part – and not appearing to do so could damage a brand’s reputation. A 2013 survey of citizens of 10 countries that included the U.S., France, Brazil and China found that 9 in 10 people said they would boycott a company they believed behaved irresponsibly.

And this is especially true of industries that are more directly connected to the crisis. In the current situation, for example, there’s been a shortage of hand sanitizer, which fashion companies that make perfume can easily produce. And manufacturers are, as we’ve seen, capable of repurposing their assembly lines to build ventilators.

Not doing its part, in this environment, could result in a long-term hit to a company’s reputation.

The other motivator is preempting government regulation, which becomes a greater risk during and after a crisis.

So companies will often pursue voluntary self-regulation and take other proactive measures during a crisis in hopes of forestalling a more onerous government reaction. A recent Stanford study found that even a modest effort can work to effectively preempt regulation.

Furthermore, this allows companies to set the terms and control the agenda, allowing them to choose actions that are in the interest of society, profitable, and avoid the costs and pains of complying with new regulations.

At the moment, companies may be stepping up to avoid a more draconian response from the government, such as when Trump invoked the Defense Production Act against GM, which allows him to control and direct corporate resources towards production of critical equipment. This also gives the federal government priority in contracting, limiting a company’s ability to find the most efficient or profitable contracts.

So next time you read about a company doing something for the greater good, applaud the effort. But you could consider its other strategic motivations as well.