Why Congress Couldn't Ever Stop Trump From Pardoning Roger Stone 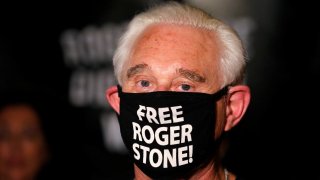 President Donald Trump recently commuted the sentence of his friend and political ally Roger Stone, meaning Stone remains convicted but does not have to serve prison time.

Article II, section 2 of the Constitution grants the president the power “to grant reprieves and pardons for offenses against the United States, except in cases of impeachment” – which includes reducing or commuting sentences, as well as pardoning people for federal crimes, which can reverse their convictions, or preventing them from being charged in the first place.

All but two presidents in U.S. history have issued pardons – and the two who didn’t were William Henry Harrison and James Garfield, both of whom died after very short times in office.

Trump is not the first president to use the pardon power to remedy what he sees as politically motivated prosecutions of his appointees and allies. But as a former general counsel to the House of Representatives, I believe congressional Democrats can’t investigate the president’s decision or do anything to reverse it.

Pardons and commutations are common

In December 1992, after losing his reelection bid, George H.W. Bush pardoned former Defense Secretary Caspar Weinberger and five other officials who had served in the Reagan administration of charges related to the Iran-Contra arms-dealing scandal, in which the U.S. illegally sold weapons to Tehran and sent the proceeds to fund right-wing insurgents in Nicaragua.

However, most presidents through history, including recently, have focused their pardons on “values and social policy,” White House historian Lindsay Chervinsky told The New York Times. One example of that is Gerald Ford’s 1974 pardon of former President Richard Nixon, in what he said was an effort to ensure “domestic tranquility,” to heal the nation from the rift of Watergate.

In response to the Stone commutation, Jack Goldsmith, a conservative legal scholar at Harvard Law School and a former official in George W. Bush’s Justice Department, told The New York Times, “This has happened before in a way. But there has been nothing like Trump from a systematic perspective.” He noted that 31 of the 36 pardons and commutations Trump has issued have advanced Trump’s own personal interests or been brought to his attention by celebrities.

A source deep in history

In 1925, Chief Justice William Howard Taft, himself a former president, explained the source of the president’s pardon power: “The King of England, before our Revolution, in the exercise of his prerogative, had always exercised his power to pardon … ordinary crime and misdemeanors.” Since at least medieval times in England, the royal prerogative has been a set of powers a monarch can use regardless of opinions or objections from other parts of government. The prerogative is derived from the historic belief in a monarch’s divine right to rule. It includes the power to alter, or reverse, criminal punishments.

As such, the Supreme Court has held the pardon power to be an “act of grace” entirely within the president’s discretion and beyond review by Congress or the courts.

That exclusion is so powerful that one Supreme Court ruling declared a pardon “makes [a pardoned person] … a new man.” That 1866 decision came in response to a federal law passed after the Civil War that required anyone who wanted to practice law in federal courts to swear an oath that they had never borne arms against the U.S. nor served in the Confederate government.

In that case, Augustus Hill Garland, a former Confederate senator, had – like many former Confederate officials – received a full pardon from President Andrew Johnson for his participation in any aspect of the rebellion. As a result, the court ruled, he did not need to swear the oath to be allowed to continue his career as an attorney. The pardons could serve the nation, as Johnson had hoped, and help bring the American people back together after the war.

Amid worries that Trump’s commutation of Stone’s sentence was self-serving, the chairman of the House Judiciary Committee, New York Democrat Jerry Nadler, has promised to investigate.

This article by Stanley M. Brand first appeared in The Conversation on July 17, 2020.