Why This Conservative Petition Calls for Justice and Reform (Not Riots) 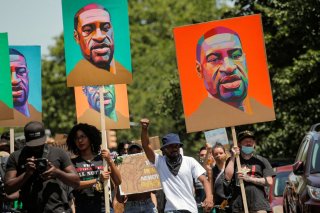 Conservative leaders are calling for justice—rather than chaos—in the wake of the death late last month of a black man in police custody in Minneapolis.

“Conservatives are confronting a country at unrest,” reads a June 12 memo from the Conservative Action Project.

“Peaceful demonstrations over the unjustified murder of George Floyd have turned violent, exploited by individuals and organizations using Floyd’s death to pursue their own agenda of social conflict and destruction,” the signatories to the memo wrote.

Floyd died May 25 after Derek Chauvin, a white Minneapolis police officer, pressed his knee against Floyd’s neck for more than eight minutes as Floyd lay handcuffed on a street after his arrest.

“Some of the videos of the unrest all over America … clearly show some protesters breaking the law by looting, for their own gain and, apparently, their own great amusement,” the memo reads. “Are we to condemn all protesters because of the relatively few arsonists and looters?”

The signers maintain that black Americans and other people of color “have dealt with pain and abuse, pain that makes it harder for some to trust the police,” adding:

But we reject the sweeping claim that all of law enforcement is racist. Rather, the majority of police officers—many of whom are black—are noble individuals protecting all the people in their communities.

The petition says that President Donald Trump’s administration should work with the Justice Department to reform law enforcement.

“Part of securing that trust comes from holding people accountable,” the memo says. “President Trump should direct the Attorney General to use the Department of Justice Civil Rights Division to vigorously investigate the actions of police and the ongoing riots and take action against anyone who violates federal law or rights protected by the U.S. Constitution.”

While they insist America isn’t racist, they add that the country has work to do.

“Americans continue to strive relentlessly to honor that principle, bettering themselves and their country in the face of obstacles and imperfections,” the signers write, concluding:

It is this fierce belief in the dignity and equality of all that has made America the greatest barrier to racism and tyranny that the world has ever known.

As conservatives, we remain unceasing in our commitment to these principles, and in our striving to help America live up to these ideals.