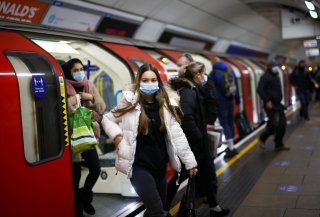 After two months of soaring COVID-19 cases in the UK, numbers have again started to fall – and to the surprise of many, fall quite dramatically. New cases peaked at 54,674 on July 17 before falling to 23,511 on July 27. They rose slightly to 27,734 on July 28, but the seven-day average continued to fall.

We should note that whether this decline will continue is as yet uncertain, as the effect of lifting most of England’s remaining restrictions on July 19 is yet to work its way into the statistics. We probably won’t know the impact of this until at least the last day of July.

But why might cases appear to be falling again so soon after restrictions have been lifted? To answer that question, we need to know something about how diseases spread and become endemic.

SARS-CoV-2, the virus that causes COVID-19, isn’t the only coronavirus that affects humans. Other common, seasonal coronaviruses also infect us, causing the common cold.

With these coronaviruses, immunity following an infection is measured more in months than in years. Most of us can expect repeat infections with these other coronaviruses throughout our lives, typically every three to six years. Our experience with COVID-19 may end up being the same. Reinfections following an initial natural SARS-CoV-2 infection are now also being reported in the UK.

This lack of long-term protection against infection means that herd immunity is probably impossible and that the virus will become endemic and continue to circulate in human populations. If this happens and the disease then stabilises, such that case numbers are constant across the population, neither increasing nor decreasing, it will have reached what’s called an “endemic equilibrium”.

So is this what we’re now witnessing? Possibly. One of the basic models of how infectious disease cases change over time is called an SIR model, which looks at how many people are susceptible to a disease, infectious with it or have recovered from it (and so are immune) at any one time.

With this model, cases increase rapidly at the start of an epidemic as lots of people are susceptible, become infected, and go on to infect other susceptible people. But as infections mount, over time fewer people are susceptible and more have recovered. The rate of growth therefore decelerates, the epidemic reaches its peak, and then case numbers decline to an endemic equilibrium point, where they remain roughly stable.

The real world, though, is rather more complex than a SIR model. It behaves more like a SEIRS model, a variation of the basic SIR model that incorporates other factors into calculating how the disease spreads.

In a SEIRS model, the rise and fall of case numbers and the point of endemic equilibrium depend on a range of influences. These include measures such as “beta” (which is the average number of contacts a person has over a set amount of time, multiplied by the probability of the disease being transmitted when there’s contact between a susceptible and an infectious person) and “latency” (which is the lag between someone being infected and becoming infectious). Critically, the model also factors in the changing immunity of the population, either through births and deaths or, as we have already discussed, waning immunity.

As in the SIR model, the rate of epidemic growth slows to a peak before cases fall back to an endemic level. But in this SEIRS model, the infection approaches its stable endemic equilibrium in a series of epidemic waves, as the model’s extra data inputs make it much more sensitive and complicated (and as a result more realistic).

The changes we’ve seen over the past couple of months are likely due to changes in contact between people across the UK. We were in fact seeing the delta variant wave slowing quite quickly by mid-June, suggesting that we were approaching the endemic equilibrium. But then something happened that shifted beta significantly: the European Football Championship (which ran from June 11 to July 11).

Cases started surging dramatically towards the end of June soon after England’s first game. That surge was quite short-lived and was already slowing again until another surge followed the quarterfinals before again slowing relatively quickly. In Scotland the pattern was different. We still saw a surge associated with the start of the Euros, but cases started falling about 10 days after their last game, which was on June 22.

The difference in these graphs is therefore potentially explained by England reaching the final, sustaining higher levels of mixing for longer. And the patterns they show from early June onwards are consistent with the UK approaching the endemic equilibrium for COVID-19. This means we may not see another sustained surge in infections. July 19 will have influenced the beta measure somewhat, but even if we see some increase in cases as a result of things reopening, it’s unlikely to be great or sustained.

Paul Hunter is a Professor of Medicine, University of East Anglia