Why Depleted Uranium Rounds are the Ultimate Anti-Tank Weapon 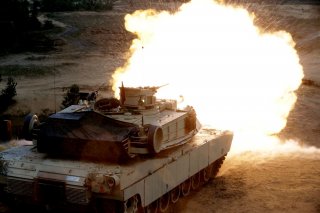 Here's What You Need To Remember: The standard tungsten antiarmor round for the M60 tank, the M735, could penetrate 350 millimeters, or 13.7 inches, of steel rolled homogenous armor (RHA), the standard measurement for armored vehicle protection.

A tank is a fast-moving, well-protected, heavily armed behemoth designed to dominate the land battlefield. As the primary offensive weapon in any army, nations compete to field the best tanks in both peace and war. In the 1980s, the U.S. Army took the drastic step of arming its tank, the M1 Abrams, with the ultimate upgrade: a tank-killing round made of uranium, the heaviest naturally occurring element on Earth. The result is an unmatched tank killer capable of destroying any fielded tank.

The M1 Abrams tank was first fielded by the U.S. Army in the 1980s. The Army had preferred the 105-millimeter gun, the British-designed Royal Ordnance L7, also known in the United States as the M68. The M68 had armed the M60 series of tanks for decades and was considered a proven “good enough” gun. The M1’s turret could only accommodate fifty-five rounds of 105-millimeter ammunition, a reduction from the sixty-two rounds the older M60 tank could carry. An even larger gun would further reduce ammo capacity to a mere forty rounds.

Pentagon officials, on the other hand, wanted to equip the M1 with the larger German-designed Rheinmetall M256 120-millimeter smoothbore gun. The civilian leadership felt obliged to use the gun in part as a way to offset German participation in the NATO AWACS program. A larger gun would also “future-proof” the M1, allowing it to defeat future tanks with heavier armor. A compromise resulted, in which the M1 would be initially manufactured with the M68 gun, but would be upgradable to the M256 at a later date. Moreover, a later version of the tank, later called M1A1, would come standard with the larger M256.

While the tank was now future-proofed, the point about smaller ammunition capability still stood. The fire control system on the M1 was so advanced that it could hit a moving target at two thousand meters with 90 percent accuracy. The problem was not going to be missses and wasted ammunition, but ensuring that hits translated into kills.

At the same time, the United States was researching the use of depleted uranium as an armor penetrator. A byproduct of nuclear reactor fuel, depleted uranium was harder and denser than existing tungsten-tipped penetrators. Accelerated to extremely high speeds, this allowed a depleted-uranium (DU) round to smash through an unprecedented amount of armor. The pyrophoric nature of uranium and steel would cause the DU to catch fire upon penetration, causing catastrophic damage inside the tank.

Meanwhile, efforts to future-proof the M1’s armament were coming in handy. The Soviet Union was known to be deploying a new main battle tank, the T-80. U.S. intelligence believed that the T-80, like other modern tanks such as the M-1 and Leopard 2, had shifted away from an all-steel armor to a mixed composite matrix that included ceramic armors. The result was dramatically improved “composite” armor protection. The T-80 had a frontal turret protection of five hundred millimeters of RHA, and glacis plate (frontal hull) protection level of 450 millimeters of RHA. The 105-millimeter gun had finally run its course as an effective armament.

Improved M1A1 tanks equipped with the larger 120-millimeter gun began rolling off assembly lines starting in 1985. The 1991 Persian Gulf War against Iraq saw the M829A1 depleted-uranium round used by M1A1s against Iraqi T-72s with devastating effect. Nicknamed the “Silver Bullet,” the round could penetrate an estimated 570 millimeters at two thousand meters, giving it good penetration against even a T-80 at typical range. Amazingly, the M829A1 has a flat, laser-like trajectory out to 3,600 meters, meaning it does not incur ballistic drop due to gravity over a distance of two miles. That gives one an idea of the pure power behind the 120-millimeter gun.

The latest generation of the M829 series round, M829E4, is designed to penetrate even further than previous versions, the exact extent of which is classified, and to defeat active protection systems such as those built on the latest Russian tanks. Whether or not the M828E4 can penetrate the armor of the new Russian T-14 Armata tank is publicly unknown. The U.S. Army has not pushed to arm the M1 with a longer gun barrel (to increase muzzle velocity) or a larger diameter gun since Armata’s introduction, an interesting nondevelopment in the face of a new threat tank.

The use of depleted uranium as a penetrator has resulted in superior armament for U.S. tankers crossing the battlefield. Nobody knows how long the one-two combination of the M256 gun and DU ammunition will continue to overmatch enemy armor, but given DU’s superior armor-piercing capability, it’s a fairly sure bet DU will arm the next generation of Army tanks as well.