Why Did China Get More Aggressive Along the Border With India? 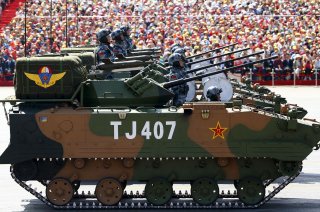 After many years of infrastructure development and gradual encroachment, China is accelerating efforts to secure its military presence and access to water rights along the Indian border near Ladakh. But while it appears Beijing has largely achieved this objective for now, the harsh Himalayan winter could again escalate its standoff with India by challenging China's ability to maintain a presence throughout the disputed territory.

Since early May, over 10,000 Chinese troops have flooded into the disputed area on the Indian border, as Beijing seeks to secure its border claims and access to Himalayan water resources. Over the past year, Beijing likely construed a perception that India was attempting to reinforce its border claims in Ladakh by constructing roads and bridges near the Line of Actual Control. As is the case with many other Chinese territorial claims, such as those in Arunachal Pradesh or the South China Sea, China is also seeking to establish greater strategic depth around its borders. In Ladakh specifically, this means expanding control from the open plains of Xinjiang into the much more defensible Tibetan Plateau. The further China extends its reach into this mountainous area, the tougher the military challenge of threatening its western border becomes for Beijing's opponents. Controlling the source and course of rivers that run from Ladakh also provides a great deal of environmental security for China, as the Himilayan mountains in the region are an important source of water to the areas below them on either side.

China is defending its claims in Ladakh through a significant logistical effort, shoring up its presence while further projecting Beijing's military strength into this complex terrain. Leading up to the latest escalation, both India and China had been steadily advancing their territorial claims in the area through the construction of roads and bridges. China, in particular, has spent years gradually constructing infrastructure in the border areas that hosts its military build-up.

Pushback from India following the June 15 border clash has prompted China to withdraw forces from several forward positions in Ladakh, though these limited drawdowns have so far had little impact on China's greater military advancement in the border region. In May, China removed the "no man's land" that had separated its forces from Indian troops since the two countries' border war in 1962. As evidenced by the latest bloody skirmish, this lack of separation has, in turn, led to a much more volatile situation on the border in recent months, and India's refusal to back off eventually resulted in negotiations to re-impose a minimal buffer zone in early July. Chinese forces, however, have not withdrawn from all of their most forward positions, just those most contentious ones at Galwan Valley, Hot Springs and Pangong Lake. But even in those areas, Chinese troops still maintain a significant presence just kilometers away from Indian positions, effectively upholding Beijing's deterrent.

Dramatic changes to operating conditions this winter, however, will present a major test to China's ability to uphold its deterrent capability in Ladakh year-round. China initially launched its military push into Ladakh in May, when the region's snow- and ice-covered valleys had just started to thaw. Though still extremely challenging terrain, the summer is by far the easiest season to maneuver these mountainous areas. But as winter begins to settle in November, the entire region will once again be covered in deep snow, which will make a continued build-up of both Chinese infrastructure and troops in Ladakh difficult. Beijing may be planning to carve out several positions in the region for its troops to wait out the winter months, though freezing temperatures, icy roads and reduced visibility due to snow will still severely limit China's ability to resupply or reinforce these troops via ground or helicopter operations. This, in turn, may provide India with opportunities to exploit reduced Chinese mobility during the winter or heading into spring.

The Nature of China's Military Push Along the Indian Border is republished with the permission of Stratfor Worldview, a geopolitical forecasting and intelligence publication from RANE, the Risk Assistance Network + Exchange. As the world's leading geopolitical intelligence platform, Stratfor Worldview brings global events into valuable perspective, empowering businesses, governments and individuals to more confidently navigate their way through an increasingly complex international environment. Stratfor is a RANE (Risk Assistance Network + Exchange) company.