Why Did The French Manufacture The Worst Gun Ever? 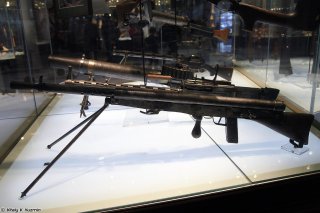 Here's What You Need to Remember: At the start of World War I, France had not a single light machine gun in its inventory, and a crash program was created to acquire one. The result was the Chauchat. The Chauchat looked like bicycle parts because it was produced by the Gladiator Company, which made French bicycles, motorcycles and cars in peacetime.

This article first appeared several years ago and is being republished for readers.