Why Did the U.S. Air Force Bomb This Hawaiian Volcano? 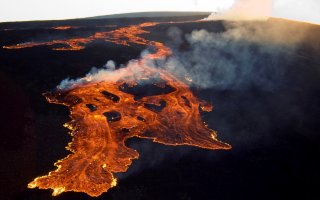 Here's What You Need to Know: Mauna Loa has felt the wrath of American airpower more than once.

So, ten bombers were dispatched, each carrying two 600-pound bombs, with each bomb containing 300 pounds of explosives. Though enemy defenses could be described as light, accuracy still left something to be desired, with some bombs landing hundreds of feet from the target.

Nonetheless, six days after the bombing, the lava flow stopped. Jagger proclaimed the mission was a success. But another geologist, Harold Stearns, who had been aboard one of the bombers, questioned whether the bombs had made a difference. “The tube walls look 25 to 50 feet high and deep in the flow so that I think there would be no change of breaking the walls," he wrote. "The lava liquid is low. The damming possibility looks effective but the target is too small.”