Why Does the A-10 Warhog Still Fly? Just Check Out Its Cannon 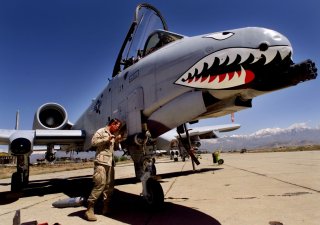 Here's What You Need to Remember: In September 1966, the Air Force launched the Attack-Experimental program. or A-X, to develop the new close-air-support plane. The new proposal specified a 30-millimeter rotary autocannon with a rate-of-fire of 4,000 rounds per minute.

The new proposal specified a 30-millimeter rotary autocannon with a rate-of-fire of 4,000 rounds per minute. The Air Force selected two competing gun designs from General Electric, which had developed the earlier M61 Vulcan, and Philco-Ford, developer of the unsuccessful 25-millimeter GAU-7.General Electric’s design won out. The Air Force designated it GAU-8 or, more technically, the “A/A49E-6 Gun System.”