Why Does the UK Want More Nuclear Weapons? 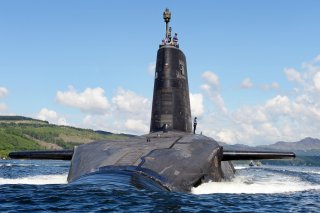 In March, the United Kingdom took many nuclear policy experts by surprise with its announcement that it was increasing the cap on its nuclear stockpile from 225 to 260 warheads. This reversal of decades of reductions of the UK’s nuclear stockpile was spelt out in the government’s ‘integrated review’ of security and defence policy.

When Britain obtained the Trident D5 missile from the United States in the early 1980s, the capability exceeded UK military needs and the decision was taken not to deploy the maximum number of warheads on the missile. The Trident submarines could carry more warheads and strike more accurately than the UK believed was necessary.

The size of the UK nuclear force has been guided over the years by considerations of what constitutes a ‘minimum deterrent’. The UK has sought to put a certain number of enemy targets at risk.

Missile defences around Moscow led the UK to improve the penetrability of its former Polaris missile under the ‘Chevaline’ program in the 1970s to ensure that its warheads could pierce those defences.

The size of the UK’s deterrent has been gauged in concert with the much larger US capability. The UK and its allies have historically been concerned that the US might be reluctant to use its nuclear forces in defence of its allies and have believed it necessary to possess a ‘second centre of decision-making’ in which their own weapons could be used in a supreme national emergency.

The British government says the decision to expand its nuclear stockpile is driven by a deterioration in the strategic landscape and technological threats. Russia has been overhauling its nuclear forces since 2007 and investing in new technologies such as underwater nuclear drones and hypersonic missiles. China has been increasing its nuclear capabilities and its current hostility towards Taiwan increases the risk of a China-US confrontation.

In addition, the UK is mindful of the need to deter newly proliferating countries as well as novel threats such as cyberattacks. The UK has committed to replacing its four Trident submarines with a new generation of vessels to preserve its deterrent into the 2050s.

The surprise for some is that Russian improvements in missile defences have played a key role in the UK’s decision.

Western intelligence has been monitoring Russia’s comprehensive upgrade of its missile defences around Moscow and neighbouring areas, and it’s not the first time that anti-ballistic missile improvements around the Russian capital have influenced UK strategic thinking.

Recently declassified papers in Britain and the US demonstrate that such concerns were being expressed as far back as the early 1980s and even resulted in a spat between Margaret Thatcher’s government and Ronald Reagan’s administration, something we discuss in more depth in this article in the Journal of Strategic Studies. The main cause of those tensions was the determination of the Reagan administration to move ahead with its Strategic Defense Initiative (SDI).

US advocates of SDI regarded the 1972 Anti-Ballistic Missile (ABM) Treaty as an obstacle that placed constraints on the deployment of US and Soviet missile defences. However, the British government regarded the ABM Treaty limiting the deployment of missile defences as essential to preserving strategic stability and enshrining a concept of deterrence based upon the threat of nuclear retaliation. It viewed this as the key to stability and to safeguarding the UK’s nuclear deterrent.

Britain was concerned that the possible demise of the ABM Treaty and the US deployment of space-based missile defences would lead to the Russians improving their own defensive systems with damaging consequences for Britain’s independent nuclear deterrent.

The George W. Bush administration eventually withdrew from the ABM Treaty in 2002. The treaty’s collapse has paved the way for advances in Russian missile defence systems as well as US anti-ballistic missile programs, creating the unease we now see in the British defence establishment.

Russian President Vladimir Putin has referred to the US withdrawal from the treaty as a justification for the development of new nuclear weapons that can penetrate US missile defences. Early in 2018 Putin stated:

After the US withdrew from the Anti-Ballistic Missile Treaty we’ve been working hard to develop new promising weaponry systems and this enabled us to make a big step forward creating new strategic arms … US global missile systems are mainly against ballistic missiles and these are the core of our nuclear deterrent. This is why Russia has been developing extremely effective systems to defeat missile defence and all our ICBMs are equipped with such systems now.

With its minimum deterrent, the UK is sensitive to the development by the Russians or Chinese of offensive or defensive nuclear systems that could undermine its strategic posture. The fears that surfaced 40 years ago are now becoming reality.

The UK has decided that increasing its offensive nuclear capabilities provides the most cost-effective way to offset the risks it faces and it’s prepared to tolerate the opprobrium of enlarging its stockpile of the most destructive weapons known to humankind.