Why Donald Trump’s Words Work, and What To Do About It 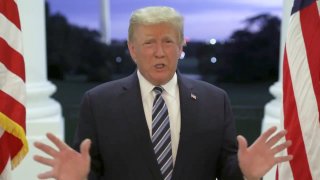 As America chaotically careens toward election day with President Donald Trump fighting a COVID-19 infection, we should stop and ask: Just why and how do Trump’s words work? And how does the recent confusion sown by his doctors at Walter Reed Medical Center amplify that work?

Perhaps more importantly: What can we do about it?

These questions strike at the core of a deep and persistent misunderstanding about communication. Too often people assume that communication is a matter of transmitting information from one place to another and that words simply carry meaning.

From this perspective, the president’s words function as a conduit from his head to everyone listening. With this president, we have all become accustomed to the concept of “misinformation,” whereby we recognize that intentionally false or misleading information is transmitted to the listener, and how it’s had a devastating impact during the COVID-19 pandemic.

We’ve also been awed by his use of Twitter to communicate that misinformation.

The transmission model of communications describes the technical movement of a signal over a channel and across a distance. But this is a poor description of presidential rhetoric.

Too often we think that the complex, human task of communication is the same as the technical process of transmission. We worry whether someone “gets” our suggestions. When the president’s doctors update us on his health status, we assume that they’re just “giving” us information. “Giving” and “getting” are verbs of transmission.

Parsing the information transmitted by a president, determining whether it’s true or false or what’s really going on, is an ineffective way to understand what Trump’s words actually achieve. It doesn’t matter whether the information he transmits is accurate or inaccurate, and we make a mistake when we focus too much on accuracy and inaccuracy.

Then what to focus on?

What I and many others call the “rhetorical model of communication” suggests that words have impact, and that meaning is an outcome of the effects words produce. About 2,400 years ago, Gorgias, the famous sophist and democratic theorist, argued that words had a similar effect as drugs on the body. Ancient Athenian soothsayers would speak to the wounds of soldiers in battle in hopes that their words would heal.

So instead of asking whether a president’s rhetoric is true or false, instead of trying to interpret the information presented in order to receive an accurate sense of what Trump is really saying, we ought to start asking: What effect do the president’s words have on us? For example, what is the impact of his anti-mask mockery on his followers and on public health efforts to keep citizens safe?

Trump’s words are aimed at producing strong reactions. When he mocks mask-wearing, he knows that he’ll evoke a strong reaction from both the media and his followers, and he doesn’t seem to care about the accuracy of the information he’s transmitting. He knows that elections are not won or lost on policy ideas or rational voters making informed choices. They are won or lost on the basis of the effects produced by the candidate’s words.

Those effects drive us to the polls and motivate us to act and reason in specific ways.

I’ve taught rhetoric and communication classes for 20 years, and in almost every class, I begin by telling my students to pay more attention to the effects their words have on others and not the information they wish to convey. This president has surely mastered that lesson. He speaks with the intent of producing the strongest possible impact and cares not at all about the information transmitted.

There is no mistaking the intended effects of this president’s rhetoric. He aims to create feelings of resentment, distrust and suspicion. Mapping the world in terms of “us” and “them” creates conflict (and is perhaps the cornerstone of fascist rhetoric).

Conflict with those we resent and distrust drives attention — this is the ethos of the entertainment industry, reality television and thousands of years of theatre. Making us feel uncertain, anxious, fearful — this is what Trump’s words do, regardless of the information they transmit. The uncertainty created by his doctors at Walter Reed served this same function — they attracted attention via uncertainty.

The feelings Trump targets draw us in, make us pay attention to all of his transgressions and affect our relations with others who share our space. Attention is persuasion, because meaning is in the way we react to his words, not in the information he transmits.

Every time CNN or Fox News broadcasts the president’s news conferences, they amplify the effects by spreading them to larger audiences. Trump knows this, and yet our news outlets continue to let it happen.

Because dramatic tension fuels attention, and Trump’s words work to generate tension, anxiety, conflict and therefore attention. We could parse the rhetorical tactics that typically generate the strongest reactions and easily see them in Trump’s words (hyperbole, reification, ad hominem attacks, ambiguity). But we ought to focus more on how we react in order to limit his ability to persuade.

The president’s words right now are affecting all of us; they are driving us from one another and creating battle lines like the plot of a good drama.

Where are our soothsayers? Who will speak to our wounds in hopes of having the same affects as drugs on our bodies, like Gorgias believed?

Resistance to Trump requires changes in the way we react to his words. Like a parent who does not react to their children’s tantrums (which are designed to generate attention), we must react with neutrality and objectivity, not more insults or hyperbole.

To put it more succinctly: Saving democracy requires defying Trump’s words by reacting differently from what they typically prescribe or intend. We need to react with civility, care and calm to undo the cycle of attention and persuasion.