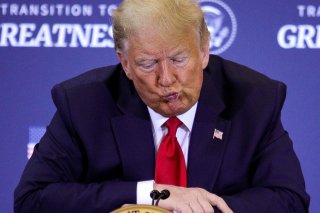 President Donald Trump’s poll numbers are slipping less than six months outside of the election while former Vice President Joe Biden is seeing his support rise amid a stubborn pandemic and growing protests over the death of George Floyd.

Fifty-five percent of people in a CNN poll published Monday said they would vote for the presumptive Democratic nominee, while 41% said the same for Trump, who shocked pollsters after he defeated former Secretary of State Hillary Clinton in a close presidential election in 2016. The CNN poll is not an outlier.

An NPR/PBS NewsHour/Marist poll published on June 5 showed Trump’s approval rating sitting at 41%, which is down two points since the last time NPR measured the president’s overall approval rating in March. His overall disapproval number increased five points to 55%, NPR’s poll showed. Biden is leading the president, 50% to 43%, in that poll as well.

A Monmouth University poll published on June 3 also showed Trump trailing the former vice president. Biden is supported by 52% of registered voters over Trump, who has the support of 41%, according to the poll. The former vice president’s lead stood at 50% to 41% in May, 48% to 44% in April, and 48% to 45% in March.

“The race continues to be largely a referendum on the incumbent. The initial reaction to ongoing racial unrest in the country suggests that most voters feel Trump is not handling the situation all that well,” Patrick Murray, director of the independent Monmouth University Polling Institute, said in a statement attached to the poll.

The polls coincided with nationwide demonstrations against the death of Floyd, a 46-year-old black man who died May 25 after a Minneapolis police officer knelt on his neck for nearly nine minutes, a video of the incident showed. The officer, Derek Chauvin, was immediately fired after the incident and faces second-degree murder and manslaughter charges.

All three polls showed the president underwater on racial issues.

Nearly 67% of people polled in the NPR survey said Trump has mostly increased racial tensions, while only 18% of people in the poll suggested he’s decreased tensions, of whom 41% were Republicans. The CNN poll showed that 31% of people surveyed approve of Trump’s handling of racial issues while 63% said Biden would handle the issues more effectively.

In addition to heightened racial tensions, critics have also lashed out at Trump over his response to the coronavirus pandemic, which originated in China before spreading to the United States, where it has killed a reported 110,000 people. Officials across the country tried slowing the virus through stay-at-home orders, which subsequently resulted in tens of millions of lost jobs.

The pandemic has hurt the president’s poll numbers in the battleground state of Michigan, too. Nearly 60% of Michiganders in an EPIC-MRA survey published Sunday gave Trump a negative rating on his handling of the virus pandemic, while 41% of people in the survey gave him a positive rating. Biden is leading the president in Michigan, 53-41.

Trump narrowly won Michigan in 2016 despite trailing Clinton in March and August of that year by 10 points, 47-37 and 46-36, respectively, according to EPIC-MRA polls at the time.

Recent employment numbers could lead to an uptick in Trump’s fortunes if poll numbers are any indication.

Voters trust the president on the economy more than Biden by a three-point margin, according to a Fox News poll published in May.