Why Empires Rise and Fall, According to One Great Military Expert 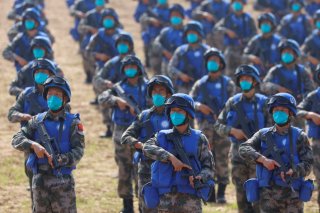 Here's What You Need To Remember: Clausewitz’s culminating point should serve as a cautious reminder for every decision-maker from squad leaders in fire fights to the commanders of global coalitions. Commanders that pass their culminating point of victory might still find a way to win. Conversely, risk-averse leaders might find a way to fail while they still have bullets and beans aplenty.

In March of 1812, thirty-two-year-old Carl von Clausewitz crossed the frontier into Russia, intent on joining the Imperial Army and continuing the fight against an old enemy. In 1806, Napoleon had humiliated the Prussians at the battle of Jena-Auerstadt. Clausewitz had then endured a further ignominy: having to accompany his defeated general to France as his aide-de-camp. After the indignity of being a prisoner of war, Clausewitz was itching for payback. As Napoleon gathered his troops in Poland, preparing to invade Russia, the Prussian saw his chance.

Napoleon Bonaparte (1769-1821) had risen to power in the wake of the French Revolution. Beginning in 1802, he led successive military campaigns in which he defeated most of the armies of Europe. On a warm June day in 1812, his Grande Armée entered Russian territory, on the march toward Moscow. He reached the Russian capital by September. The leaves had not yet fallen from the trees. But the army of the Romanov emperor, although beaten, was still in being. And, the emperor refused to surrender.

Napoleon found himself sitting on a throne of ashes, his troops starving and the punishing Russian winter coming on. The little Corsican began the long, painful retreat to France. Along the way, his army dissolved. Soon, he lost his crown.

Clausewitz saw this happen firsthand. He did not forget.

Clausewitz was both soldier and scholar. As director at the War Academy, he began to draft histories of various campaigns including Napoleon’s defeat in Russia, incorporating some of the material into his most famous and influential work On War.

The distinguished scholar Michael Howard considered Clausewitz a model historian. “I was to find in Clausewitz an analysis of the historian’s task that coincided exactly with my own experience,” Howard wrote, “[f]irst find out what happened. Then, establish a chain of causation. Finally, apply critical judgement. Before one could interpret the past, one had to recreate it.”

In unpacking the history of the Russian campaign, Clausewitz introduced the militaries of the Western World to one of his most enduring and powerful insights—what he called the “culminating points of victory.” Clausewitz had originally described the concept in a separate essay, but then added and supplemented the material in Book VII of On War.

Clausewitz thought the culminating point offered a profoundly important discernment into how wars are fought. Even when one side had every advantage over the other, victory could not be guaranteed. “Often,” Clausewitz cautioned, “victory has a culminating point.” Taking the battle to the enemy required expending resources—men, ammunition, fodder. The more an army advances deeper into enemy territory, the more it moves away from its base of supply and support, potentially diminishing its combat power. “Every reduction” Clausewitz warned, “in strength on one side can be considered an increase to the other.” At some point, a powerful attacker might expend so much in pursuit of an elusive objective that his force becomes weak and vulnerable to counterattack.

When the force crosses over the “point” where the advantages that might ensure victory are whittled away—the force crosses the culminating point. That is exactly what happened to Napoleon. He stretched his army across Europe like a rubber band; when the strain got excessive, the band snapped. The Russians chased him all the way back to France.

Clausewitz’s culminating point should serve as a cautious reminder for every decision-maker from squad leaders in fire fights to the commanders of global coalitions. Commanders that pass their culminating point of victory might still find a way to win. Conversely, risk-averse leaders might find a way to fail while they still have bullets and beans aplenty. What Clausewitz provides is conceptual tool to think through the potential consequences of their actions.

This concept may have particular significance in an era of great power competition. Readers may be familiar with another concept—“strategic overreach”—popularized by the historian Paul Kennedy in The Rise and Fall of Great Powers (1989). As one summary noted, Kennedy argued that great powers “in order to remain great powers, had a task that was simple to understand but difficult to execute: to balance wealth and their economic base with their military power and strategic commitments. These states therefore faced a constant triple tension between investment, defense and consumption. Failure to get this balance right risked overextension as a large economy vulnerable to predators like nineteenth century China, as a stagnating over-militarized power like the Soviet Union, or as a credit-addicted, inflexible failure like Phillip II’s Spain.”

There is, of course, no pat formula for how to avoid plunging over the cliff to defeat. After all, one of the reasons competitors overreach is because of pressure from the other side. The Soviet Union, collapsed, (like Napoleon did facing off against the Tsar’s army) because the West did not fold like a cheap suit during the Cold War.

The key to being a tough, resilient competitor—whether on a military battlefield or in the geo-political struggle—is to be as smart about protecting your own competitive strengths as it is about punishing the other side.

This piece appeared earlier this year and is being reprinted due to reader interest.