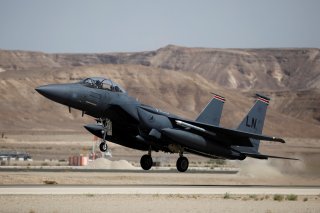 Here's What You Need to Remember: The Super Hornet proved to be useful in Iraq. It was able to conduct more than just attack or “bomb-dropping” missions. It conducted overhead surveillance, targeting, and information connectivity.

The Navy and the Air Force appear to be making a push to supplement the Defense Department’s growing fifth-generation fleet of F-35 stealth fighter jets with advanced, enhanced fourth-generation aircraft. The Air Force’s Boeing F-15EX Eagle II and the Navy’s Block III F/A-18 Super Hornet jets could be described as 4.5-generation aircraft. These jets are helpful on the modern-day battlefield but their existence raises interesting questions. Just how sensible is it to build and deliver advanced fourth-generation fighters that might be incapable of countering fifth-generation jets flown by America’s adversaries, such as China’s Chengdu J-20 and Russia’s Sukhoi Su-57.

The basic airframe structure and design of the Super Hornet, many of which have been preserved, upgraded and sustained through the Navy’s Service Life Extension Plan, is still viable. But some military strategists may question the rationale for continuing to build enhanced fourth-generation aircraft such as the Eagle II and Super Hornet. These aircraft are not quite advanced, stealthy and effective enough to truly rival enemy fifth-generation jets and successfully counter next-generation enemy air defenses. And yet, they may be far too advanced for counterinsurgency or counterterrorism missions wherein the United States already has air superiority. So just what kinds of missions are these enhanced fourth-generation aircraft best suited to perform?

It does not seem feasible that a Super Hornet or Eagle II could ever truly be “stealthy” but it might be able to make itself less detectable to some extent. Would it be less detectable against fifth-generation Chinese and Russian aircraft? Or advanced S-400 Russian air defenses? Or would upgraded Super Hornets primarily be useful against lower to mid-level threat environments? That seems to be a fundamental question to answer when trying to decide whether a Super Hornet or Eagle II might truly be used as a deterrent or combat asset. In counterinsurgency environments or areas where the Air Force maintains air superiority, a wide range of less expensive or light-air-attack aircraft might be just as effective.

For example, the Super Hornet proved to be useful in Iraq. It was able to conduct more than just attack or “bomb-dropping” missions. It conducted overhead surveillance, targeting and information connectivity. Perhaps advanced sensors, AESA radars and longer-range sensors might indeed prove extremely useful in high-end combat? It seems logical for the Eagle II to supplement, support or offer additional capabilities to an advanced fleet of F-35 fighter jets. Yet, given concerns about cost and sustainment costs, decisionmakers would likely question the cost-value equation of enhancing and delivering a newly built generation of fourth-generation aircraft.

Nonetheless, these aircraft are far from “useless.” The Super Hornet and Eagle II are engineered with an advanced suite of next-generation combat capabilities.