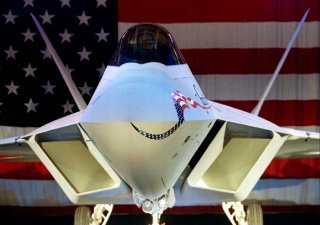 Here's What You Need to Remember: While the F-22 may have been allowed to fall behind the F-35 in a few aspects during the Iraq and Afghanistan wars, the military’s refocus on a peer or near-peer engagement has thrust the F-22 back into the spotlight again, with upgrades to match.

The Raptor has received relatively few upgrades compared to legacy fourth-generation F-15 and F-16 aircraft and now is significantly outdated in some ways. For example, F-16s, F-15s, and F/A-18s are all equipped with the JHMCS missile cueing technology, which allows a pilot to lock onto an aircraft just by looking at it. The F-22 currently does not have this capability.

The combination of the new datalink and new missiles will put the F-22 on parity with modernized fourth-generation aircraft in weapons and networked warfare capability. The F-35 still remains ahead in sensor technology.

While such upgrades have been planned since 2013, they only recently have been fully funded and given priority with increased budgets in FY ’19. If all goes well, the F-22 will remain on the cutting edge of air superiority into the 2060s, at which point a sixth-generation fighter is planned to take over.