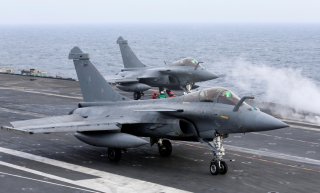 Here's What You Need To Remember: Almost all of the significant military activities undertaken by France since 2001 (and indeed before) have come in the context of a multilateral, cooperative effort with other major countries. This has meant that Charles de Gaulle can contribute, and contribute effectively, but that her periods of refit do not come at the expense of the coalition’s overall military power.

France’s first carrier entered service in the interwar period, but for a very long time, the French navy trailed behind international counterparts in naval aviation. This changed in the Cold War, however, and today France operates the world’s most advanced carrier outside of the U.S. Navy. How did France build its naval aviation force, what does it do today and what direction will France take next?

Four in total, these carriers helped the French navy develop its naval aviation muscles. The next step was big; France constructed a pair of CATOBAR aircraft carriers, Clemenceau and Foch. Commissioned in 1961 and 1963, the ships displaced 30,000 tons and could carry around forty modern aircraft. A third carrier, the much larger Verdun, was cancelled before being laid down. Clemenceau and Foch, operating the F-8 Crusader and later the Super Etendard, would form the backbone of the world’s second-largest carrier force for the latter half of the Cold War. After nearly forty years of hard service, the two ships were decommissioned in favor of France’s next carrier, the nuclear-powered Charles de Gaulle.

France also has a trio of assault carriers, the Mistral-class ships Mistral, Tonnerre, and Dixmude. At 20,000 tons, the Mistrals can carry around thirty helicopters of various types. During operations off Libya, the Mistrals were pushed into a strike role, serving as platforms for attack helicopters conducting attacks against Libyan government positions.

France’s carriers have contributed in a variety of ways to France’s strategic security vision. From the beginning, the French navy appreciated that its carriers might play a role in high-intensity combat against the Soviets, and accordingly the carriers prepared for that mission. Clemenceau and Foch were equipped for nuclear deterrence, as is Charles de Gaulle. But France also regarded itself as having responsibilities to its (soon to be former) empire, and French carriers served in the Indochina War, as well as the Suez Incident.

Charles de Gaulle is expected to serve until 2040, and the French government has authorized studies on the construction of a replacement, which could potentially overlap with CdG’s final years in service. Any future ship or ships would likely retain nuclear propulsion, adopt the EMALS catapult system, and operate conventional CATOBAR aircraft. Would France build two? The United Kingdom has done it, and the French navy has often chafed at the capability hit it endures with Charles De Gaulle enters refit. But much depends on France’s financial and security situation in the late 2020s and early 2030s, and these factors are extremely hard to predict. It is also unclear what sort of aircraft the next generation of French carriers will fly. By 2040 the Dassault Rafale will be quite old, and the future of France’s “sixth-generation” fighter project remains murky.

Robert Farley, a frequent contributor to the National Interest, is author of The Battleship Book. He serves as a Senior Lecturer at the Patterson School of Diplomacy and International Commerce at the University of Kentucky. His work includes military doctrine, national security, and maritime affairs. He blogs at Lawyers, Guns and Money and Information Dissemination and The Diplomat. (This first appeared in April 2018.)