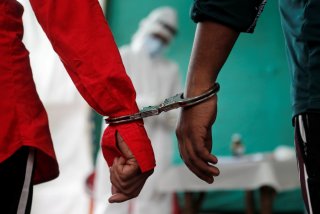 Georgia’s “citizen’s arrest” law came to the national forefront earlier this year after several men misused it to justify chasing down and killing Ahmaud Arbery, a 25-year-old jogger the men said they suspected of burglary.

Now, some Georgia legislators are pushing to repeal the law, claiming it has racist origins and is outdated in an era of modern law enforcement.

Although no legislation has been formally introduced, the outcry has been substantial enough that a state House of Representatives committee recently held hearings about repealing the citizen’s arrest law.

Arbery’s death was tragic, and Georgia law on citizen’s arrests arguably suffers from some defects worth addressing. But repealing the law entirely would be a grave mistake, leading to absurd legal results.

Moreover, the arguments for repeal are based on misrepresentations of the law’s origins, and fail to take into account just how often law-abiding Georgians justifiably rely on the law to detain actual criminals.

Rooted in Common Law, Not Slavery

In the months following Arbery’s death, numerous pundits and media outlets have decried the concept of citizen’s arrest as a racist outgrowth of southern slave codes.

That is simply untrue. The legal concept of “citizen’s arrest” is deeply rooted in English common law and was first codified in the 1285 Statute of Winchester, centuries before America’s founding and long before the development of slave codes. This common law tradition conferred on private citizens not just the right but the duty to apprehend criminal offenders.

In fact, the notion of a large, professional police force is a quite modern development. For most of Anglo-American history, the task of enforcing the law, bringing criminals to justice, and protecting the public safety was a community affair. When a crime was committed, a “hue and cry” was raised and a duty imposed on every person to search out and arrest the criminal.

This tradition of community law enforcement naturally was transported to the American colonies. Although the “duty” of the “hue and cry” gradually gave way to a nonmandatory “privilege” or “right” of citizen’s arrest, its recognition was universal.

Eventually, many states codified this common law privilege into their statutory codes. Today, every state recognizes some form of citizen’s arrest, either as a statutory right or a common law defense.

But this is unfortunately true of many parts of the criminal justice system during that time. The inappropriate warping of a longstanding legal concept does not make that concept inherently unjust or unnecessary.

Repeal Would Hurt the Law-Abiding

The ability of private citizens to detain criminals who commit crimes in their presence is a benefit to all law-abiding Georgians, even in a modern society. Although Georgia, like all states, has hundreds of professional law enforcement organizations, the reality is that police officers rarely are physically present during the commission of crimes.

What’s more, the majority of local police departments in the United States are very small and employ no more than 10 full-time officers. Often, these few officers are responsible for tens of thousands of residents with little or no support from other jurisdictions.

So while we can and should rely on professional law enforcement officers as the preferred method of dealing with crime, it isn’t always practicable. Law-abiding, private citizens continue to play a meaningful role in their own protection, as well as in deterring crime and arresting criminals.

Of course, repealing the citizen’s arrest law would not affect the ability of Georgians to act in self-defense, which is covered by a separate statute. However, a blanket repeal nonetheless would lead to some absurd legal results.

Consider, for example, a scenario where a homeowner confronts an intruder in the middle of the night. Under the state’s self-defense statute, the homeowner would be legally justified in using a firearm to shoot the intruder, but not to detain the intruder until police arrived.

Instead, the act of forcibly detaining a criminal would be considered false imprisonment, because nothing in the law would authorize this use of force by a private person. In other words, you could use lethal force to deter crime, but not to detain the criminal caught in the middle of his crime.

Additionally, despite claims that Georgia law on citizen’s arrests often is abused or misused by private citizens, evidence suggests the opposite. Except for the Arbery case, I was unable to find a single publicized instance in recent years where a Georgian made headlines for a controversial citizen’s arrest.

On the other hand, a simple search through The Heritage Foundation’s Defensive Gun Use Database and local media outlets turned up plenty of times when Georgians properly used the law to detain criminals in a noncontroversial manner. Consider the following examples:

These are the types of citizen’s arrests commonly carried out by law-abiding Georgians, who deserve legal protection when they detain criminals.

And yet, if Georgia repeals its citizen’s arrest law, all of these individuals would be guilty of false imprisonment or worse, because they would lack any legal authority to apprehend anyone, regardless of the circumstances.

Clarify the Law Without Repealing It

Arguably, some aspects of Georgia’s citizen’s arrest law could use some important clarifications. As I have written previously, gun owners should know their state’s laws regarding citizen’s arrests and understand how they apply to real-life scenarios.

But the language of Georgia’s statute is rather vague, especially compared to many other states. Laymen without access to expensive legal databases may not be able to find or understand judicial opinions that better explain how courts have limited or defined the language.

Some changes to consider include limiting the ability of private persons to engage in active pursuits with criminals, and clarifying when deadly force may be used or threatened in the context of a citizen’s arrest. The statute also might benefit from clarifying the standard of evidence required before a private person may arrest another.

Additionally, the modern distinction between felonies and misdemeanors often is neither intuitive nor clear to nonlawyers. Georgians might benefit from a statute that better specifies which offenses rise to the level of felony or common law “breach of the peace” for which a citizen’s arrest can be conducted.

What happened to Ahmaud Arbery was a tragedy. But it does not justify repealing a law used by Georgians far more often to lawfully detain verifiable criminals than to harass or harm innocent persons.

This article by Amy Swearer first appeared in The Daily Signal on August 6, 2020.