Why the German Navy Is Heading to War Games with Australia 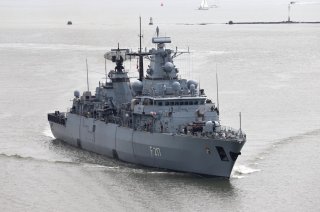 In a week when Australia’s relationship with France was left hanging by a thread due to the cancellation of the Attack-class submarine project, Germany quietly doubled the number of upcoming port visits to Australia by the frigate Bayern during its six-month Indo-Pacific tour, the first mission to the region in more than 20 years.

While the timing was certainly coincidental, the significance is unmistakeable: China’s loss has been Australia’s gain. Long before FGS Bayern departed Wilhelmshaven last month, Germany sought permission for a port visit to Shanghai. The request arose not for operational reasons, but from dissent within Germany’s coalition government. The Defence Ministry wished to send a clear message with the deployment, whereas the Chancellery and Foreign Office insisted on appeasing China. The appeasers won.

But the request put China in a position of being able to withhold its consent pending promises of ‘good behaviour’ in relation to the Bayern’s transit through the South China Sea. That China prematurely yielded this card in refusing to grant access far in advance of the Bayern’s arrival might hint at a discreet effort at damage control by German diplomats. Australia was quick to capitalise and roll out a second welcome mat in Darwin, timed to follow the long-planned visit to Western Australia.

Currently in Perth, where strict Covid-19 restrictions remain in place, the crew of FGS Bayern will be officially welcomed to naval base HMAS Stirling with a commanding officer’s luncheon on 30 September—‘VIP attendance is expected’, says the Department of Defence—to be followed by an official reception and wreath-laying ceremony to mark Germany Unity Day at Kings Park on 3 October.

As is typical on a naval diplomatic mission, the German frigate will participate in a number of exercises at sea with the Royal Australian Navy and various other regional navies. Other activities with the Australian Defence Force are also planned. No major announcements have been flagged, but observers will be watching for the possibility discussed earlier this year by German Defence Minister Annegret Kramp-Karrenbauer of German officers being deployed within the RAN. ‘Germany is a valued defence partner, and we are pleased to have the opportunity to strengthen cooperation between our navies in this region,’ a Defence spokesperson told The Strategist. It comes after Germany participated as an observer nation for the first time this year at Exercise Talisman Sabre.

Germany and Australia have common interests in a free and open Indo-Pacific. Germany launched its Indo-Pacific guidelines last year, emphasising its concerns about global supply chains and the security of its maritime trading routes. This was followed by the launch of the largely congruent EU Indo-Pacific strategy this month.

In Germany, the deployment is seen as a remarkable gesture, due in part to the society’s general reluctance to deploy military forces and the fact that the Deutsche Marine has only 10 similar ships of various classes, rendering them a scarce commodity with many competing operational demands.

It’s inescapable that one frigate is a modest signal in comparison to the astonishingly high levels of activity in the region, not least the British carrier strike group, comprising aircraft carrier HMS Queen Elizabeth with several destroyers, frigates, logistics ships and a submarine. The UK is following this with a five-year Indo-Pacific deployment of two offshore patrol vessels. For its part, Australia is currently conducting Indo-Pacific Endeavour ’21—its premier naval diplomatic activity—across Southeast Asia under the command of Commodore Mal Wise.

The Bayern’s deployment can also be seen in the context of ‘clearing of the decks’ before a seismic moment in German politics: the retirement of Angela Merkel after 16 years in office and the election held on Sunday. In June, before the campaign period, the Germany parliamentary budget committee also approved €19 billion ($30 billion) in long pending and sometimes controversial defence acquisitions, including the P-8 Poseidon maritime patrol aircraft, two new Type 212CD submarines, new fleet oilers and the replacement of the Deutsche Marine’s signals intelligence ships. As a new coalition government is hammered out in the coming months, significant uncertainty about defence policy and procurement priorities will persist.

In any case, some have argued that too much European naval commitment to the Indo-Pacific could also be undesirable, if it comes at the expense of focusing on the increasing security challenges posed by Russia. The point was made by retired Australian rear admiral James Goldrick in a recent publication:

Australia welcomes European powers having an active role in the Indo-Pacific and regular deployments of European naval forces in the region, but a more coherent geostrategic approach would see Europe focus—and increase—its naval and military efforts on Europe, while the United States and other Indo-Pacific powers continue to reorganise to balance China.

US Defense Secretary Lloyd Austin echoed that sentiment during remarks at the Fullerton Lecture in Singapore in July.

Accordingly, the modest but important German deployment of FGS Bayern, with its two visits to Australia, may prove to be genau richtig, or just right.