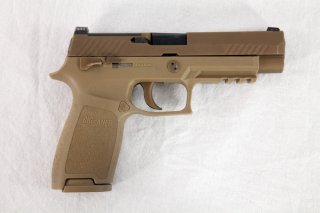 Here's What You Need to Know: For the XM17 Modular Handgun System competition, SIG Sauer partnered with Winchester, a company that supplies large amounts of ammunition in a variety of calibers to the U.S. military. As part of SIG’s bid, they also offered Winchester’s M1152 Full Metal Jacket and M1153 Special Purpose loads.