Why Great Navies Collapse (And Whether China's Could Be Next) 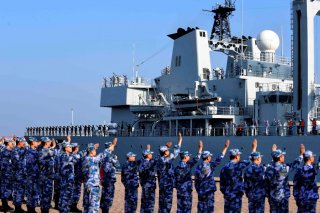 Here's What You Need to Remember: Only one “new” naval power managed to maintain its position, and the United States Navy (USN) today represents the PLAN’s greatest obstacle.

The People’s Liberation Army Navy (PLAN) is the most visible, and possibly the most consequential, manifestation of China’s emergence as a great power. In three decades, China has turned a large, but relatively minor regional force into a fleet of global consequence.

But now that China has its navy, can it keep it? The historical record is mixed. Over the past 130 years several nations have embarked on radical schemes of fleet-building designed to elevate their positions in the international hierarchy. A distressing number of these schemes have failed, with powerful, expensive capital ships left rotting at dock or rusting at the bottom of the sea. Only one “new” naval power managed to maintain its position, and the United States Navy (USN) today represents the PLAN’s greatest obstacle.

Why did so many countries embark on the construction of great fleets, how did they do so, and why did they fail? This article briefly surveys the rise and collapse of the navies of Germany, Japan, and Russia, alongside the success story of the United States. Some of these navies persisted across several generations of capital ship, but only the USN managed to achieve and maintain its world position over the entire course of the last 120 years.

Since at least the late nineteenth century, the largest navies have organized themselves around “capital ships,” individual vessels of great fighting power surrounded by a variety of support ships. The historical analysis of Alfred Thayer Mahan greatly influenced this development, but it nevertheless represented a break with practice of the eighteenth and nineteenth century, when ships-of-the-line largely acted without a support network. At the Battle of Trafalgar, for example, the contending fleets included sixty ships of the line and only fourteen smaller vessels. By contrast, at the Battle of Jutland the Germans and British employed fifty-eight capital ships and 192 support vessels. And at the Battle of Philippine Sea, Japanese and American fleets included twenty-four battleships and fleet carriers, supported by 213 smaller ships.

For purposes of measurement, we will focus on surface ships in excess of 10000 tons. This is not an ideal metric, because ship roles change over time, as do the range and lethality of weapon systems. Of course, there are exceptions. Modern U.S. nuclear submarines (especially ballistic missile submarines) tend to operate independently (although this is less the case of their Soviet and Chinese counterparts). Technological evolution is also complex. Here, we abstract the transition between four different generations of capital ships, beginning with the coal-burning, armored pre-dreadnought battleship type that dominated major navies until 1905. After 1905 the “all big gun” dreadnought battleship became the currency of naval power, and came to dominate naval thinking. Dreadnoughts remained dominant (at least notionally) until the 1930s, when they were replaced by the fast battleship and the aircraft carrier. In the 1950s, jet-capable supercarriers and nuclear submarines (of both the attack and ballistic-missile variety) became symbolic of naval dominance.

With this framework in mind, it’s worth examining the expansion of the PLAN in light of the build-ups of the American, German, and Japanese navies at the turn of the twentieth century, and of the Soviet Navy in the mid-twentieth century. The comparisons suggest that the PLAN’s recent expansion should be taken seriously, but that China still faces significant strategic challenges.

Kaiserine Germany dove into the idea of a major modern fleet. Between 1893 and 1908, the German Imperial Navy added twenty-four pre-dreadnought battleships to its fleet, and between 1908 and 1917 replaced these with nineteen dreadnoughts and seven battlecruisers. This represented an enormous outlay of national treasure for a state that faced major land challenges along several fronts. Perhaps unsurprisingly, Germany’s will and ability to maintain this fleet faltered. Most of the High Seas Fleet scuttled itself while at anchor in Scapa Flow in 1919, under the mistaken impression that it was about to be divvied up among the Allies. After that, armistice terms prevented Germany from rebuilding its fleet.

Germany reconstituted a portion of its navy in the late 1930s, but never matched the size and extent of the High Seas Fleet. Defeat in war and political division then ended the German Navy as a major force. Germany’s surface fleet represented a two-and-a-half generation experiment, but failed to pay off strategically in either peace or war.

In a remarkably similar timeframe to that of Germany, the U.S. Navy added twenty-four pre-dreadnought battleships between 1895 and 1908, and much like Germany it replaced those ships with twenty-two dreadnoughts and two aircraft carriers, albeit at a slower pace than the Germans. Between 1934 and 1947, the United States commissioned fourteen fast battleships and thirty-one large aircraft carriers.

Since World War II the United States has constructed nineteen 70000+ ton supercarriers and many large amphibious warships. The U.S. Navy is the only organization to field a competitive force in each of the four generations of modern naval development.

The Imperial Russian Navy enjoyed a long, distinguished history, and in the late nineteenth century successfully made the transition to pre-dreadnought battleships, building twenty-two such ships between 1890 and 1911. Russia then did its best to modernize the fleet through the construction of seven dreadnoughts. However, the triple disasters of the Russo-Japanese War, the First World War, and the Bolshevik Revolution effectively extinguished Russian naval power throughout the dreadnought and first aircraft carrier periods.

The rise of the Soviet Navy after World War II is complicated, in part because the types of ship that constituted a modern fleet had substantially increased. Soviet postwar naval expansion began with the commissioning of fourteen 16000 ton Sverdlov-class gun cruisers between 1952 and 1955. Although useful enough ships, technological changes almost immediately relegated them to second class status. During the 1960s, 1970s, and 1980s, the Soviet Navy added two helicopter cruisers, four aircraft carriers, four battlecruisers, and a vast array of large nuclear attack submarines. This represented a fourth generation challenge to the United States Navy, although the USN always held the advantage.

However, the Soviet surface navy faded away ignominiously after the collapse of the Soviet Union. The new Russian government, short on resources, did not prioritize the surface fleet. Its major vessels are mostly scrapped, sold, or rusting away in reserve. Moscow figured out that a large surface fleet was a luxury it could not afford in difficult economic circumstances.

Japan’s interest in a modern major fleet began before the pre-dreadnought period. The Imperial Japanese Navy, more constrained of resources than either the German or U.S. navies, acquired a limited number of pre-dreadnoughts and semi-dreadnoughts. Japan followed up this first generation with twelve dreadnoughts and two aircraft carriers. Between 1934 and 1945, Japan added another two fast battleships and nine aircraft carriers. The first generation fleet enabled Japan to defeat Russia and make its mark on Northeast Asia. The second generation made Japan a global player. The third generation was utterly destroyed, along with the rest of Japanese military power, by the United States and the United Kingdom. Surrender terms meant that Japan played no role in post-World War II naval developments. Only today, with the conversion of the Izumo-class aircraft carriers, has Japan begun to reassert itself as a major naval power.

Beset with political and economic difficulties, China skipped the first three generations of modern naval development. For the first fifty years following the establishment of the People’s Republic, the PLAN concentrated on coastal defense, fielding a numerically heavy force of small ships and submarines. Ambitions for a large surface fleet became clear in 2007, with the commissioning of a 25000-ton amphibious warship. It has since commissioned four more large LPDs (landing, platform docks), along with the 60000-ton aircraft carrier Liaoning. Within the next five years the PLAN will likely accept in excess of ten new large warships into service, including two more aircraft carriers, 3 LPDs, 3 LHAs (landing helicopter areas), and six Type 055 destroyers.

This is a large force of large ships, one that is reminiscent in size of the pre-World War I expansion in Germany, Japan, and the United States, and the postwar Soviet expansion. China has accompanied this expansion with the construction of large numbers of support ships and submarines, the latter including both SSNs and SSBNs. China’s fleet is large, modern, and will in short order be superior to any competitor other than the United States Navy.

Of these aspirants, only the United States persisted in its decision to maintain a large navy. The USN became the world’s largest, most powerful navy at some point during World War II, and has held that position without serious challenge since. The USN has regenerated itself through several generations of capital ship, from pre-dreadnoughts to dreadnoughts to aircraft carriers to super-carriers.

The other great navies show the pitfalls of a national maritime emphasis. Germany’s navy failed to help it win either World War, and indeed probably contributed to the size of the coalition in the First. The Imperial Japanese Navy helped Japan win an empire, but not to hold it. And the Soviet Navy rusted away after the collapse of the USSR. For newly emerging powers, navies do not ensure security. But aspirations to global power seem to require a great navy.