Why the Iron Beam Puts Israel's Iron Dome to Shame 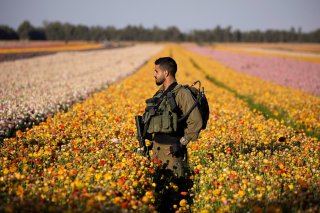 Here's What You Need to Remember: Iron Beam counteracts swarm tactics by relieving Iron Dome from handling very short-range interceptions, a category with which the Dome has historically struggled.

Iran’s bold summer campaign against U.S. allies and interests in the Persian Gulf-- including military support for Houthi rebels and an alleged drone strike against Saudi Arabia--has alarmed Jerusalem to the prospect of shining a critical spotlight on the core pillar of Israel’s defensive deterrent against Iran: its anti-air systems.

The operational and logistical flaws in the Israeli Defense Forces’ (IDF) are technically impressive, but expensive and unwieldy.

But Israeli defense firm Rafael Advanced Defense Systems resumed work on a laser-based missile defense prototype in 2009. Rafael Systems unveiled an early concept model, named the Iron Beam high-energy laser (HEL), at the 2014 Singapore Air Show. That employed dual multi-kilowatt solid-state lasers, compatible with any radar and capable of being mounted on a wide range of vehicles. Sources differ on precise details, but Iron Beam is currently thought to have a maximum effective range of up to seven kilometers and is reportedly capable of destroying missiles, unmanned aerial vehicles (UAV’s), or mortar shells around four seconds after the twin high-energy fiber-optic lasers make contact with their target.

The National Interest previously outlined a two major problems facing the Iron Dome: poor cost-efficiency and vulnerability to swarm tactics. If it performs roughly as projected, Iron Beam has the potential to eliminate the first problem outright while greatly mitigating the other. When accounting for the price of the Tamir interceptor missile as well as all the redundancies designed into the system to minimize failure rates, every Iron Dome interception costs around $100,000 to $150,000. By stark comparison, Israeli defense commentator Zvi Shor told Defense IQ that every Iron Beam shot will clock in at a mere $2,000; another Israeli defense industry source called Iron Beam’s interception costs “almost negligible.”