Why Israel’s Air and Ground Forces are Unstoppable 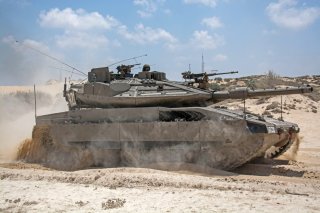 Here's What You Need To Remember: The Jericho III is the third missile to serve as Israel’s land-based nuclear deterrent. The Jericho III is believed to have a range between 4,800 and 6,000 kilometers, and is capable of carrying a 1,000-kilogram warhead payload.

Since then, the Israeli Army has seen combat every decade since its founding. It has fought numerous wars in defense of Israel, and embarked on numerous punitive expeditions into the Sinai, Lebanon, Gaza, and the West Bank.

The brainchild of General Israel Tal, chief of the Armored Forces, the Merkava is Israel’s first and only indigenous main battle tank. The tank was specially designed for Israeli tank doctrine: low to the ground, with a powerful gun, the Merkava even had the engine placed in the front of the tank to provide protection to the crew. Combined with heavily sloped composite armor, Merkava made an excellent defensive tank, well suited to defending against Egyptian armored formations on the Sinai or Syrian forces on the Golan Heights.

Spike is mounted on everything from ground vehicles to Seraph (Apache) helicopters, naval vessels, and drones. It can be used against tanks and armored vehicles, ships, aircraft, and even individual high-value terrorist targets.

Namer is different however in actually being built from older tanks. A Namer infantry fighting vehicle is an early model Merkava Mk.1 tank with the turret and main gun removed, and an enormous amount of armor applied to the front glacis, sides, and side skirts. A Namer weighs roughly as much as a Merkava before modifications, a testament to the amount of armor that has been added.

Israel’s second-generation indigenous rifle, Tavor is the standard infantry weapon of the IDF. A futuristic-looking rifle, the Tavor’s bullpup design—wherein the magazine is located in the buttstock—makes for a compact design while still retaining a rifle-length barrel.

The Tavor may look like a 21st-century rifle, but its roots are strictly 20th century. The compact rifle uses a gas-operated, rotating bolt design straight out of the AK-47, which in turn was inspired from the M-1 Garand. The bullpup design allows the rifle to be a compact 28 inches long while maintaining a 18-inch long barrel.

The “Smasher” rocket launcher is actually the American M270 MRLS. A mainstay of the U.S. Army’s artillery branch, the M270 was developed in the 1970s as part of the “Big 5” of weapons systems that would transform the Army. Based on a modified M2 Bradley chassis, the “Smasher” carries twelve 227-millimeter rockets. A three-vehicle battery can send 23,184 cluster munitions downrange in one minute, saturating at one kilometer by one-kilometer area.

Israel has 48 “Smasher” systems. Currently, Israel is limited to rockets with a 40-kilometer range, but new 150-kilometer range rockets are in the pipeline. Such rockets will give Israeli artillery, positioned in Haifa, the ability to strike Damascus.

The Israeli Air Force (IAF) has been instrumental in Israel’s defense, providing air superiority over Israel, close air support over Israeli ground forces, and performing strikes against targets deep in the enemy’s homeland. Over the past three decades, it has also taken on a counterterrorism role, using airstrikes to assassinate terrorist leaders and destroy caches of weapons from Tunis to Sudan.

The IAF has an estimated 648 aircraft of all types, manned and serviced by 35,000 active-duty personnel. An additional 24,500 reservists can be called up during wartime. At total mobilization, the IAF enjoys a comfortable ratio of 91 personnel for every one aircraft, far above the Egyptian Air Force’s 30 to one ratio and the Royal Saudi Air Force’s 38 to one.

A lot was riding on the F-15, which the IAF anticipated would give Israel air supremacy over its territory and air superiority over the entire Middle East. They weren’t wrong. On June 2nd, 1979, six F-15s escorting airstrikes against the PLO in Lebanon shot down five MiG-21s in a single engagement. In September, four more MiG-21s were lost to F-15s. Between 1976 and the end of the 1982 Lebanon war, Israeli F-15s shot down 58 enemy planes with zero losses.

The F-16I Sufa is a derivative of the F-16 Block 52 multirole fighter. A two-seat fighter also capable of strike missions, it is probably best described as “Ra’am Lite.”