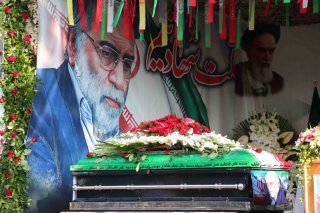 Here's What You Need to Remember: The Mossad has responded by targeting those helping Tehran achieve its nuclear ambitions. Israel has conducted several operations against scientists and engineers associated with the program—many inside Iran itself. Jerusalem has even allegedly recruited Iranian citizens, such as Majid Jamali Fashi, who was later charged with placing a remote-control bomb on the vehicle of nuclear physicist Masoud Almohammadi in January 2010.

On Nov. 27, 2020, Iranian nuclear scientist Mohsen Fakhrizadeh was assassinated outside of Tehran. The Islamic Republic blamed Israel for taking out the man allegedly in charge of Iran’s nuclear weapons program. If true, Fakhrizadeh wouldn’t be the first scientist to fall before the guns of Mossad. In fact, Israel has a long history of conducting covert operations against those working for regimes that seek the Jewish state’s destruction.

More than half a century ago, Egypt was Israel’s chief opponent. Led by the young and charismatic Gamal Abdel Nasser, Cairo constantly plotted against Jerusalem.

On July 21, 1962, Egyptian newspapers reported the successful test launch of four surface-to-surface missiles. Forty-eight hours later, the missiles were paraded through the streets of Egypt’s capital with President Nasser noting that they could hit any point “south of Beirut”—in other words: Israel.

Egypt’s missile development took the Jewish state by surprise. And worse was still to come. As Ronen Bergman recounted in Rise and Kill First, his 2018 history of Israel’s intelligence agencies: “the German scientists developing the Egyptian missiles that could destroy Israel weren’t obscure technicians. They were some of the Nazi regime’s most senior engineers, men who” had served the Third Reich and “helped build the V-1—the flying bomb that terrorized England—and the V-2 ballistic missile…which served as the prototype for today’s long-range surface-to-surface missiles.”

The Mossad recruited a Swiss employee at the Zurich office of EgyptAir, a company, Bergman notes, “that occasionally served as cover for Nasser’s intelligence agencies,” and began opening and photographing its mail. The Israelis soon had a relatively advanced—if belated—understanding of Egypt’s missile program. The evidence they gathered showed plans to build nine hundred missiles which they feared could be armed with radioactive and chemical warheads.

On Sept. 10, 1962, Israeli intelligence kidnapped Heinz Krug, a former Nazi scientist who had offered his services to Nasser and had helped set up a front company in Germany. Krug was secretly smuggled from Germany to Israel, where he was interrogated. Simultaneously, “the Mossad launched a wide-ranging disinformation operation, with a man resembling Krug and carrying documents in his name traveling South America, leaving a paper trail that indicated Krug had simply grabbed the money and run away from Egypt and his collaborators.”

The information gleaned from Krug—who was subsequently killed—led Israel to place operatives deep inside enemy countries, including Egypt, and initiate a targeted assassination campaign aimed at destroying Nasser’s missile program. The AMAN, Israel’s military intelligence agency, broke into the German headquarters of EgyptAir and snuck letter bombs into mail satchels that were set to be delivered to Egypt.

Eventually, the Mossad settled on an unconventional plan.

A Mossad operative seduced the wife of Otto Skorzeny, an infamous SS operative who had once served as Vallentin’s superior officer. A large man with a large scar on his left cheek, Skorzeny had led the Nazi operation that rescued Italian dictator Benito Mussolini during the Second World War. After arranging a meeting with Skorzeny, the Mossad promised not to assassinate or pursue him—provided that he work for them.

Information obtained by Skorzeny helped the Mossad directly target and threaten the German scientists working for Nasser. More importantly, it gave the Israelis documents which they used to pressure the West German government into offering the German emigres better jobs “as long as they’d promise not to help the Egyptians.” This, Bergman notes, “fatally crippled” Nasser’s missile ambitions.

The lessons learned from Operation Damocles would be put to use more than a decade later when it was discovered that Saddam Hussein’s Iraq was developing nuclear weapons.

In the late 1970s, Israel learned that Hussein was seeking to develop nuclear weapons—and that France was helping the Iraqi strongman develop the requisite technology. The French engineers—like the Germans before them—were paid lavishly.

Saddam thought that Jews were a “mixture of the garbage and leftovers of various nations” and, like Egypt’s Nasser, had referred to Israel as a “cancer.” Israel’s protests to the French government and the international community were ignored.

Once again, the Jewish state didn’t restrict its response to the Middle East.

On April 6, 1979, Mossad operatives snuck into a guarded shipping hangar west of Toulon on France’s Mediterranean coast. Once inside, the Israelis placed and successfully detonated explosives, destroying components which, when “fully assembled…would make a seventy-megawatt nuclear reactor.”

Saddam, however, was unbowed and ordered the project to continue. The Mossad responded by targeting those working for the dictator. On June 13, the agency assassinated Yehia al-Mashad, an Egyptian scientist who had been recruited by Iraq, in his Paris hotel room. The ensuing weeks saw engineers Salman Rashid and Abd al-Rahman poisoned in Switzerland and France, respectively.

Threatening letters were also sent to those working on the Iraqi program. Several French contractors resigned and, Bergman notes, “the Iraqi project was slowed down slightly” but “at best, Israel had bought some time before Saddam could complete the construction of the reactors and activate them.” Ultimately, the government of Israeli premier Menachem Begin decided that only bombs could stop the program. On June 7, 1981, the Israeli air force successfully destroyed Iraq’s nuclear reactor—a feat that it would repeat in Syria on Sept. 6, 2007.

The Islamic Republic of Iran would soon pick up where Saddam had left off. The regime’s Supreme Leader, Ayatollah Ali Khamenei, has called Israel a “cancerous tumor” and called for “eliminating” the Jewish state. For more than three decades, the mullahs have pursued the capability to build nuclear weapons. Since at least 1998 that project has been led by Mohsen Fakhrizadeh, a member of the Islamic Revolutionary Guard Corps, a U.S.-designated terrorist entity responsible for training terror proxies like Hezbollah and Islamic Jihad.

The Mossad has responded by targeting those helping Tehran achieve its nuclear ambitions. Israel has conducted several operations against scientists and engineers associated with the program—many inside Iran itself. Jerusalem has even allegedly recruited Iranian citizens, such as Majid Jamali Fashi, who was later charged with placing a remote-control bomb on the vehicle of nuclear physicist Masoud Almohammadi in January 2010. Eleven months later, another scientist, Majid Shahriari, would also die in a car bombing.

The remnants of Shahriari’s car would eventually be placed on display at Iran’s Holy Defense Museum, a multimillion-dollar facility where, as the journalist Jay Solomon documented, “trash cans are wrapped in Israeli flags and human skulls line a walkway.”

Writing in his 2016 book Iran Wars, Solomon observed that the Mossad’s “targeting of the nuclear scientists continued apace” after the regime caught and executed Fashi. “The assassins appeared intent on eliminating” the men involved in the program, and “if they couldn’t hit Mohsen Fakhrizadeh directly, they’d take out those closest to him.”

But now Fakhrizadeh is dead. History shows that Israel will spare no expense in eliminating those who seek its destruction.