Why It's Time To Cancel "Cancel Culture" 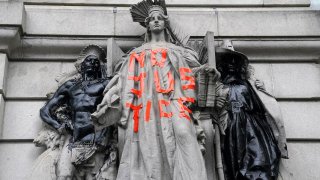 Seeing the rise of “cancel culture” can lead one to despair. But don’t believe the hype. Virtue is not being canceled. Most Americans, in fact, believe forgiveness is an essential part of a just society.

Consider a recent survey by the Cato Institute. It revealed that 49% of all Americans say cancel culture is negative. Only 27% said “cancel culture” has a positive impact on society. The poll suggests that Americans are more forgiving than the swordfighters who constantly seek revenge on social media platforms.

According to Cato’s survey, “nearly two-thirds—62%—of Americans say the political climate these days prevents them from saying things they believe because others might find them offensive.” Even more alarming, the share of Americans who self-censor has alarmingly risen several points since 2017.

And these fears cut across party lines: “52% of Democrats, 59% of independents, and 77% of Republicans agree they have political opinions they are afraid to share,” the survey notes.

Cancel culture is a direct assault on the construct of forgiveness. It seeks not to fix, but to destroy. It’s the poisonous pill that fatally blocks a prescriptive cure for human weaknesses. It diametrically opposes forgiveness, an age-old virtue central not only to the Christian faith, but even to our nation’s founding.

Alexander Hamilton left a footprint for forgiveness in Federalist No. 74, where he noted how the president must be able to make exceptions in his power of the pardon for “unfortunate guilt,” otherwise, the justice system would be “too sanguinary and cruel.”

Additionally, Hamilton pointed out, presidents may need to use clemency to subdue discontent or insurrection and thereby “restore the tranquility of the commonwealth.”

Article II, Section 2 of the Constitution thus authorizes the president to grant pardons and other forms of clemency involving “offenses against the United States.” Understanding that human beings are flawed and biased, pardons were established as a safety valve to mitigate or remedy injustice.

In 1795, President George Washington said in his annual address to Congress that he was motivated to show mercy and serve the public good by pardoning two men charged with treason after the Whiskey Rebellion. Washington’s display of forgiveness laid a foundation for how future presidents would use clemency.

This power has been used often. P.S. Ruckman Jr., a political scientist and editor of the blog Pardon Power, counts just over 30,000 individual acts of presidential clemency from Presidents Washington to Barack Obama.

Imagine if we were founded on the notion of public shaming and humiliation, exterminating without due process everyone with whom we disagreed. The Salem witch trials show just how a temporarily crazed society did act under such tyrannical rule.

The American identity exhibits greater dimensions to freedom. As members of a civil society, we must reclaim this identity.

We have a legal system designed to punish criminal behavior; ethics map out the parameters of acceptable behavior, and societal norms as a whole dictate whom to honor or admire, or associate with or engage. But cancel culture militates against all these mediating habits and institutions, and that’s why it must stop.

We need to confront our failures and provide enough space and flexibility to ensure freedom of expression and debate and to avoid abuses by the gladiators who cowardly seek to eliminate the existence of those that they disagree with or are offended by.

Frederick Douglass’ extraordinary ability to say to his former owner, Hugh Auld, “I love you, but hate slavery,” is an incredible example of how we must separate the actor’s “action” from the person.

The man who “had struck down my personality, had subjected me to his will, had made the property of my body and soul” was no enemy, Douglass explained: “He was to me no longer a slaveholder either in fact or in spirit, and I regarded him as I did myself, a victim of the circumstances of birth, education, law, and custom.”

We find the most references to forgiveness in the Christian New Testament. The story most often cited (Luke 15:11-32) is of the prodigal son who squandered his father’s inheritance, then humbly returned to his loving father’s arms. To his surprise (and that of many readers for two millennia), his father unconditionally accepts and loves him despite his moral failings.

Today, however, everyone is judge and jury, looking down the barrel of conformity and ignoring a just society’s standards. Cancel culture must be canceled. Forgiveness must be our pillar of justice.

In 1772, an English slave trader named John Newton was transporting slaves from Africa and confronted a vicious storm. His craft was severely weather-beaten, compelling him to call out to God for mercy and deliverance. Newton subsequently led a movement to abolish the slave trade in 1788.

He also wrote the hymn “Amazing Grace.” Its immortal words continue to remind Americans that forgiveness and redemption are possible regardless of sins committed. “I once was lost, but now am found, was blind, but now I see. … “

This article by Angela Sailor first appeared in The Daily Signal on July 30, 2020.