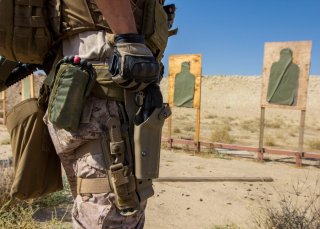 The Blackhawk Serpa holster has been kicking around since the Global War on Terror began. For its time, it was a rather revolutionary design that provided the military and police forces a dedicated duty holster, made from polymer, with active retention, a modular design, and an affordable price tag. Before the Serpa, the Bianchi M12′ suicide’ holster served troops. The M12 earned its name as the suicide holster because you’d have to be suicidal to consider it.

While it carried a firearm, the M12 made accessing the gun painfully slow. The Serpa series promised the same level of retention with less bulk and a faster draw. Serpa series holsters had a multitude of attachments that allowed the gun to ride with belt loops, on a thigh rig, on a MOLLE panel, and beyond. While the Serpa seemed perfect, it soon proved to be a pretty poor choice. In fact, it’s downright dangerous.

Even now, in 2021, I keep seeing Serpas on the belts of Soldiers, Marines, Sailors, and Airmen. The good news is, the recent adoption of the M17 and M18 service pistols, along with their Safariland holsters, will eventually phase the Serpa out. However, it could take a substantial amount of time before the new pistol and holster become issued force-wide. If you currently serve and are issued a Serpa holster, I encourage you to find an alternative.

My Ride With the Serpa

As a pistol-qualified machine gunner, I toted a Beretta M9 alongside my M240. I, like most Marines, carried that M9 in a Blackhawk Serpa. Initially, I loved the holster and wore it on both a thigh rig and on my plate carrier, depending on what I was doing. I could draw it quite quickly, and the modular design allowed it to be mission adaptable.

Then I got to Africa. We were doing a little training, and my machine gun squad acted as OPFOR (role-played as an opposing force) for a rifle squad. At sunset, we humped into the African wilderness to set up an ambush. Suddenly, I felt something swing and move on my chest. I looked down to see my Serpa now oriented with the barrel pointing at my face.

Two of the three contact points had sheared off, and a single screw held the now swinging SERPA and the M9 it carried. I’m not partial to having a gun pointed at my head, so I removed the M9 and dropped it into the kangaroo pouch on my plate carrier. Keep in mind, I wasn’t doing anything stressful–just walking with an M240 over my shoulder. After that, I ditched the Serpa and eventually got a Safariland rig.

It turned out my experience wasn’t uncommon. However, beyond that structural issue, there is a key issue with the safety aspect of the Serpa. Over time people began to realize the Serpa’s design was not a particularly safe one.

Word of negligent discharges quickly began to pop up as the holster became more popular. Inside the Marine Corps, the M9’s long trigger pull, manual safety, and the fact that pistols aren’t issued frequently ensured this was rarely an issue in service, however, and it went unnoticed.

Beyond the obvious safety issues, the Serpa ended up being structurally weak, as well.

Broken Serpas became a common theme among infantry units issuing the holster. Almost always, the structural weaknesses were the points where the holster was attached to a belt, MOLLE adapter, or what-have-you. The cheap plastic easily broke when stressed. Eventually, videos even emerged of guys training for firearm retention with the Serpa and the holster simply being yanked off the adapter by the ‘aggressor.’

In my case, I guess exposure to the heat-filled environment, saltwater, and doing Marine things just weakened the Serpa over time. But even after those safety and structural issues, the Serpa’s retention button also turned out to be another weak point.

The open design of the retention button allowed dirt, sand, and debris to get inside the button and completely disable it. This would make it impossible to draw your firearm. One of the reasons I moved the gun to my chest was a warning from an experienced sergeant who was already aware of this issue. As a machine gunner, I was in the prone position frequently, and the Serpa was exposed to the ground quite often as a result, meaning even after the change, I still had to worry about it.

The Serpa isn’t a safe holster. Admittedly, the M9’s manual safety and long trigger pull helped minimize the negligent discharge concern in the Marine Corps. However, there is no reason to accept a potentially unsafe piece of gear just because the issued firearm is pretty good at compensating for it. Even beyond the issue with safety, durability concerns are also crucial to address. If the holster breaks or becomes disabled, you now have to solve your loose handgun problem. I was lucky that mine broke in training and not in combat.

I’m glad to see the Serpa fade away from being the issued rig. However, things tend to stick around in the military, and I’m betting they’ll pop up every now and again with troops who might not know better. If you have a Serpa, please consider a better rig. Safariland makes outstanding gear, and even the Blackhawk T series is a notable improvement over the Serpa. Ditch it, forget it, and move forward.

This article by Travis Pike was first published by Sandboxx.