Why Joe Biden Is Smiling? He Is Giving the IRS the Resources to Catch Tax Cheats 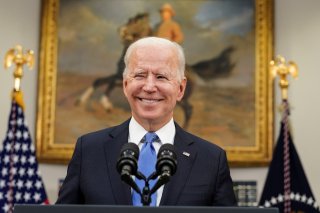 Here's What You Need to Remember: The administration’s plan also aims to close the tax gap, as the report indicated it was $584 billion in 2019 and is on track to hit $7 trillion over the next decade. The $700 billion gain would reportedly narrow 10 percent of that tax gap.

President Joe Biden’s tax enforcement plan would nearly double the number of employees at the Internal Revenue Service over the next ten years and make banks and cryptocurrency exchanges comply with stricter guidance with the government, according to a report released by the Treasury Department on Thursday.

Treasury officials estimated that the plan would raise roughly $700 billion over the course of ten years and $1.6 trillion in the decade after enactment, though officials noted that the figures are conservative since it’s difficult to calculate.

The report comes as Biden has called for $80 billion to enhance resources and operations at the IRS over the next decade to ensure wealthy tax evaders don’t engage in tax dodging and, instead, end up paying the necessary amounts owed.

Biden hopes to use the revenue raised from the upgraded operations at the IRS for programs like free community college and expanded child tax credit.

The plan works to beef-up the agency’s resources, as the new funding would go toward advancing outdated technologies and hiring nearly 87,000 employees. The report noted that the agency has experienced a 20 percent decline in its staff since 2010 and that the IRS currently has fewer auditors compared to more than a century ago.

Treasury officials project that the initiatives could raise $320 billion in revenue through 2031.

But the success of Biden’s plan depends on the “long-term congressional commitment to tax enforcement,” and the agency’s ability to implement these expansive measures.

The administration’s plan also aims to close the tax gap, as the report indicated it was $584 billion in 2019 and is on track to hit $7 trillion over the next decade. The $700 billion gain would reportedly narrow 10 percent of that tax gap. Officials also uncovered that the gap was $441 billion a year between 2011 and 2013, a figure that IRS commissioner Charles Rettig said could be significantly higher.

Another major component of the additional funding for the agency would require bank and payment providers to report inflows and outflows from accounts annually, beginning in 2023, a measure that would work toward tuning in to the “red flags” and avoid burdening regular taxpayers who comply with the agency’s tax requirements.

“Financial institutions house a lot of valuable information, and indeed already provide third-party reports to the IRS,” the report said. “Leveraging this information—rather than introducing new requirements for taxpayers—is a proven way to improve compliance.”

Treasury is also calling for cryptocurrency exchanges and custodians to make similar reports to the IRS. Transfers worth more than $10,000 in cryptocurrency would be required to be reported to the agency, similar to the guidance on policing cash transactions.

“Although cryptocurrency is a small share of current business transactions, such comprehensive reporting is necessary to minimize the incentives and opportunity to shift income out of the new information reporting regime,” the report said.