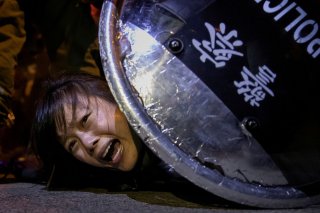 Last Friday, all hell broke loose in Hong Kong’s Legislative Council. Eleven pro-democracy members of the Council were forcibly removed from the chamber, following their efforts to prevent a Beijing-backed member from taking over the chair of a committee that clears bills for consideration by the legislature. Among the bills in the hopper: a measure making it a crime, punishable by up to three years in jail, to show disrespect toward the playing of the Chinese national anthem.

For several years now, at the start of sporting events in particular, Hong Kongers have made it clear by their hoots and hollers that the Chinese anthem holds no place of honor with them. Beijing’s pressure to bring Hong Kong under its thumb and ignore its pledge both to maintain the territory’s autonomy and to expand electoral rights has turned the city that had initially welcomed its return to China into a hotbed of civil unrest and mass protests.

Last October, just before the start of the NBA season, Houston Rockets General Manager Daryl Morey found himself in hot water when, in support of the protests by Hong Kongers, he posted the image “Fight For Freedom. Stand With Hong Kong.” The reaction from around the league was swift, with Rockets owner Tilman Fertitta quickly distancing himself from his GM. Morey deleted his tweet.

NBA Commissioner Adam Silver eventually defended Morey’s right to express his opinion (saying the “values of equality, respect and freedom of expression have long defined the NBA”). However, it was LeBron James’ — this generation’s greatest player and perhaps the most influential athlete in the world — response to the GM’s tweet that got the most attention. “Yes, we do have freedom of speech,” James said. “But at times, there are ramifications for the negative that can happen when you’re not thinking about others, when you only think about yourself.”

Morey, of course, was not only thinking of himself when he posted his support for Hong Kong’s democrats. And, to be clear, neither was James. Players’ paychecks come from a pot tied to the league’s domestic and global revenues. Take away the hundreds of millions China pays for televising NBA games and marketing rights and that pot, and its dividends, will certainly get smaller.

But the pot is not small to begin with. NBA revenues last year were $8 billion. The players, who share over 50 percent of the revenues, already make gobs of money. That’s true for the stars, whose take-home pay reaches well into the tens of millions annually, as well as the roster fillers, where average league salary is over $6 million a year. The idea that a decline in revenues from China would have, as James implies, a devastating impact “physically, emotionally, spiritually” on NBA athletes is a bit hard to believe.

Moreover, “King” James recently expressed views about respecting the US national anthem that are inconsistent with his dismissal of Morey’s support for protesting Hong Kongers. In February, he was asked about San Francisco 49er quarterback Colin Kaepernick’s refusal to stand for the Star Spangled Banner before games in protest of “a country that oppresses black people and people of color.” James’ response was: “I think it’s important to stick up for what you believe in. … I think with Kap, I stand with Kap, I kneel with Kap. … I think that anybody that would sacrifice their livelihood for the betterment of all of us, I can respect that and he’s done that.”

“King” James’ support of Colin Kaepernick is understandable. Racial injustice is worthy of protest. It concerns a dispute about which America’s most famous sports stars have not been shy in speaking their minds. Because it is a domestic issue, it is also not surprising that it has been their focus. But James’ criticism of Morey’s support for Hong Kong democrats reaches beyond America’s borders — both literally and substantively.

Kaepernick was willing to put at risk a career and forgo the income that comes with being a NFL quarterback. That’s a lot more than LeBron James would lose if he were also supportive of Hong Kongers’ right to protest by not putting their hands over their hearts as “March of the Volunteers” was played over a loudspeaker.

This article by Gary J. Schmitt first appeared in 2020  on the AEI Ideas blog.