Why the Marines Chose an LPVO (It Makes Sense) 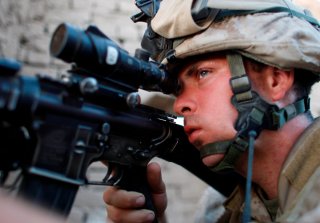 Here's What You Need to Remember: Using lessons learned from previous fights and acknowledging the future will help keep the Marines as lethal as possible. As these optics roll out, I’ll be curious to see the reaction from Marine infantrymen getting acquainted with the optic, and of course, how it will affect the way Marines fight.

Specifically, the LPVO the Marines chose is the Trijicon VCOG. VCOG stands for Variable Combat Optical Gunsight and is a 1 to 8 powered optic. The Marines labeled the VCOG as the SCO or Squad Common Optic. The VCOG is earmarked for combat arms Marines and their new M27 IAR rifle, which is serving as the general issue rifle for combat arms moving forward.

The Marine Corps is looking to purchase 19,000 of the VCOGs. SOCOM, JSOC, Force Recon, and designated marksmen have all adopted an LPVO, but the Marines will be the first to make it a general issue infantry optic.

What is an LPVO?

LPVO stands for low-powered variable optic. It refers to a magnified optic that starts with a 1X setting and then varies to a higher setting. The VCOG adopted by the USMC will be a 1x to 8X optic, outfitted with a first focal plane scope. Marines can alternate between various magnification settings.

This opens up a Marines’ versatility and ultimately makes them more lethal. Higher magnification levels allow Marines to see further and engage targets at various distances. In Afghanistan, plenty of Marines found themselves in firefights at 500 yards and beyond. The four-power magnification the ACOG offered simply wasn’t enough magnification to quickly find the enemy.

As an FFP scope, the reticle will grow and shrink as the magnification increases or decreases. As such, the holdovers built into the reticle will be useful and accurate at any magnification setting. Part of that reticle includes a bullet drop compensator that automatically allows shooters to compensate for bullet drop. Trijicon included a similar reticle in the ACOG series of rifle scopes.

For close-quarters combat, an LPVO can be set to 1X and used almost as efficiently as a red dot optic. Should a Marine need to assume an overwatch position, the higher magnification settings enable them to provide accurate fire at various ranges. When put on guard duty, the LPVO allows a Marine to detect threats earlier and engage them at a wide variety of distances.

LPVOs offer our warfighters unparalleled versatility as far as optics are concerned. With numerous special operations troops choosing the LPVO over other optics, it’s not a surprise to see the USMC take notice.

LPVO optics have gotten much more durable. Previously, variable optics were not considered for general infantry use due to durability concerns. For many years even elite Marine Corps scout snipers used a fixed 10X optic.

Companies like Trijicon are on the bleeding edge of optic technology. As such, they’ve made their optics bombproof. Durability-wise, the Trijicon ACOG was bulletproof… Almost literally. One fabled ACOG took an AK round and saved the Marine wielding it. The new VCOG offers a shock and waterproof design that’s rugged and Marine-worthy.

The biggest downside will be size and weight. The VCOG and its eight power magnification result in a much larger optic. At 30 ounces and 10.5 inches, the VCOG is nearly double the length of the ACOG and roughly three times its weight.

LPVOs are big optics, and as such, they will weigh your individual troop down. However, the ability to engage accurately at further distances will reduce the need to maneuver and rush. An LPVO will never be as durable as more simplistic optics. That doesn’t mean they still won’t kick butt; they just might be a little less durable than the old ACOG.

The Marine Corps’ move to LPVO scopes makes a lot of sense. Using lessons learned from previous fights and acknowledging the future will help keep the Marines as lethal as possible. As these optics roll out, I’ll be curious to see the reaction from Marine infantrymen getting acquainted with the optic, and of course, how it will affect the way Marines fight.

This article was originally published by Sandboxx News.