Why the Media May Be at Fault for Your Arachnophobia 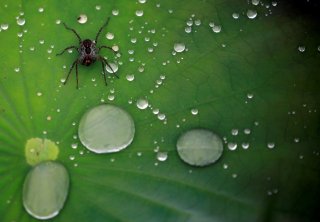 Spiders have an unfortunate media presence. No number of studies emphasising their ecological value or the potential of their silks to inspire wonder materials can overcome the negative press. The more emotive and sensational the coverage, the more likely it is to travel.

Although the proportion of spider species capable of giving humans a bad bite is very small, and no known deaths have occurred in recent decades, we retain a fear. We tend to exaggerate the risk from spider bites, even in countries with no indigenous dangerous spiders, such as the UK. There is always the apocryphal arachnid lurking under the toilet seat, or panic over false widow spiders whose infestations have closed schools.

With the arrival of autumn comes lurid news stories of amorous house spiders “the size of your hand” invading homes to find somewhere warm and dry to mate and die. It happens every year, but the media’s insistence on turning this small arachnid’s breeding season into an annual spectacle could be doing more than selling papers. A new study from Italy suggests it could be stoking arachnophobia where it may otherwise not have existed.

A web of lies

The researchers scoured the digital archives of Italian newspapers, looking for the use of “bite”, “spider” and “sting” (not that spiders do sting, but don’t let that spoil a good story) in stories published during the last ten years about four spider species thought of as dangerous: the yellow sac spider, the Mediterranean black widow, the Mediterranean recluse and the false wolf spider.

They found 314 media reports of spider encounters in Italy between 2010 and 2020 – the majority being Mediterranean black widows or recluses. The reach of each article was measured by the number of shares on social media, along with any errors such as species misidentification or incorrect medical advice. The team counted the use of certain words, such as “devil, "terror” or “panic”, to rate how each story sensationalised the encounter.

They found that media reports of spider attacks have increased in recent years, especially for the Mediterranean recluse. The rise coincided with a single report of loxoscelism – the deep ulcerations and necrosis of skin resulting from a spider bite – in Europe, and an Italian murder mystery novel in which the venom of the Mediterranean recluse is the murder weapon.

The spider species in the loxoscelism case was never definitively identified, but newspaper coverage of the Mediterranean recluse spiked nonetheless after the case was reported. Both the mysterious bite and the murder novel featured often in the increasing number of newspaper reports about these spiders. The press had found a compelling narrative to weave between a rare medical event and a well-timed work of fiction. Suddenly, recluse spiders weren’t so reclusive.

Stories that shared more recent and startling encounters travelled further. This isn’t surprising, the viral spread of content is greater if it provokes intense delight, fear or anxiety. But the emotional contagion, as the team put it, helps drive up the perceived risk from spider attack, creating unreasonable hostility towards arachnids.

Jumping spiders to the rescue

Spiders are often overlooked in conservation, despite controlling insect pests on farms and having important roles in food webs as both predators and prey. It won’t help if their media profile is largely driven by overhyped stories about “devilish” attacks and life-threatening venom. The researchers go so far as to accuse some journalists of sensationalising their stories at the expense of blameless wildlife.

Spiders are easy targets for scaremongering, but there are ways to improve their reputation. After all, some lovable spiders are cherished in popular culture. I defy anyone to watch Charlotte’s Web without sobbing.

Natural history documentaries seem to have seized on a candidate for improving the public image of spiders. If you see a cute spider feature on TV, it’s almost always a jumping spider. Furry, not so long-legged and with a large pair of eyes, it’s as if they’re designed to dispel the idea that all spiders are sinister.

Incidentally, I’m a jumping spider, according to a BBC children’s service quiz that reveals what kind of spider you are.

On the whole, spiders in films terrorise small American towns, but seldom trouble Italy. Nonetheless, Italian spiders suffering at the hands of hype enjoy some revenge in 2014’s Arachnicide. A “truly joyous” spectacle of “bad Italian cinema”, reads one review.