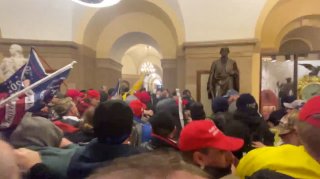 Yesterday, Congress was violently disrupted as it performed its constitutional duty. This was a direct attack on the Constitution of the United States, the rule of law, and our constitutional republic.

For more than two months President Trump has claimed, without plausible evidence and through multiple recounts and court cases, that he won the presidential election. As Cato scholars and many others have explained, the president’s attempts to overturn the election are factually and legally baseless. His allegations of fraud have been consistently rejected by courts, state legislatures, governors and secretaries of state, and members of both parties in Congress.

Despite this, the president has persisted, and too many members of Congress have echoed his claims. By doing so, they have helped stoke the flames of distrust and division in ways that present a profound threat to liberty, and they must bear some responsibility for the actions that have followed.

Our colleague Walter Olson wrote in June, during protests against police violence, “It should not be that hard to distinguish between peaceful, lawful assembly in pursuit of political causes, on the one hand, and property destruction, assault, intimidation, looting, and riot, on the other.” This remains true.

The violent disruption of constitutional processes is unacceptable and must be rejected unequivocally. Mob rule is no path to liberty. Attempting to forcibly keep a defeated president in power strikes at the core of the Constitution’s provisions for protecting the rights and liberties of the American people.

The Cato Institute has long worked to encourage people everywhere to better understand and appreciate the principles of government that are set forth in America’s Founding documents. Among these principles is the peaceful transfer of power after free and fair elections. The assault on the Capitol is a tragic violation of these principles. We condemn these actions in the strongest terms, support the rule of law and the Constitution, and reject the attempts to overturn the results of the 2020 presidential election.

Having had his day in court, the president must stop disputing the election results and prepare immediately for the transition. We urge all elected officials to condemn lawlessness and violence and to commit to the truth, the Constitution, and the peaceful transfer of power.