Why More Americans Went Hungry in 2020 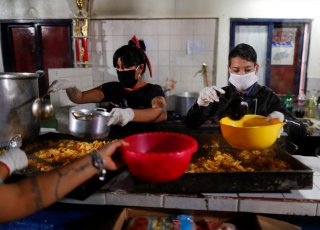 Americans in households with annual incomes from $50,000 to $75,000 experienced the sharpest increase in food insufficiency when the COVID-19 pandemic began – meaning that many people in the middle class didn’t have enough to eat at some point within the previous seven days, according to our peer-reviewed study that will soon be published in the Journal of Agricultural and Resource Economics.

When we averaged Census Bureau survey data collected after April 23, 2020, we saw that food insufficiency rates rose among Americans at all income levels.

To be sure, Americans in households earning less than $50,000 annually are the most prone to food insufficiency. That remained true during the initial months of the pandemic when places like schools, offices and restaurants remained closed to restrict the spread of COVID-19.

This situation is rare in households with incomes above $150,000. That didn’t change during the early months of the pandemic.

Separately, we studied whether the presence of more food banks and similar services made a difference in terms of food insufficiency in a given state. We found that it did, because rates fell the most quickly in states with more of those organizations per 10,000 residents. This was especially true for middle-income households earning from $50,000 to $75,000 annually.

When the COVID-19 pandemic began, there was widespread concern about food-supply disruptions and the possibility that many more people than usual would have trouble getting enough to eat. After millions of workers were laid off due to lockdowns, often on short notice, widely distributed photos of long lines of cars and people awaiting food donations reinforced these fears.

The share of households experiencing food insufficiency subsequently did rise. The U.S. Department of Agriculture found that it increased from 9.5% as of April 23, 2020, to 13.4% as of December 21, 2020.

This growth no doubt would have been higher without several short-term policy changes and a series of economic relief and stimulus packages that supplemented U.S. incomes.

Food banks and similar organizations also played a role. They helped provide emergency food aid to at least 60 million Americans in 2020, according to Feeding America, the nation’s largest anti-hunger organization.

The middle-income people who sought help from food banks and similar organizations may have turned to them because they were less familiar with government benefits than lower-income people. For example, they may not have known at first how to enroll in the Supplemental Nutrition Assistance Program, or SNAP.

People unaccustomed to needing help making ends meet needed time both to learn about food assistance options available to them, and how to apply, according to news reports. Obtaining emergency food assistance tends to be faster and easier than enrolling in SNAP.

It remains unclear whether food banks and similar organizations are cost-effective compared to government-run nutrition programs. Because SNAP distributes benefits through a special kind of debit card accepted by a wide array of retailers, administering the program requires little overhead.

Zheng Tian is a postdoctoral scholar at Penn State; Stephan J. Goetz is a professor of Agricultural and Regional Economics at Penn State.