Why Naval Mine Warfare Is Key to American Maritime Strategy 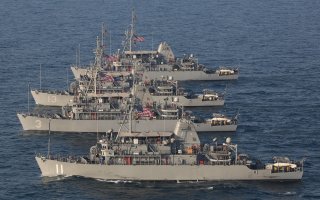 A Game of Go

The primary objective of the game of Go is the control of territory. Players do this by laying stones in ways that maximize the connectedness of their own pieces, deny connectedness of enemy pieces, and in ways that mark out the most territory on the board. Open spaces next to any stone are called ‘liberties,’ and marks opportunity for connection or disconnection. Placing your stone on an enemy stone’s liberty cuts off your opponent’s options.

It is possible to capture enemy stones by taking away the last liberty of any group of connected or individual stones. Competitive stone laying where capture is the likely outcome is equated to a ‘fight.’ Novice players often focus on winning a fight with their opponent, as they spend several turns laying stones in ways that allow them to completely surround their opponent’s group. But the overall goal is not maximizing the amount of stones captured. Preoccupation with capturing stones will lead a player to lose momentum and initiative while their opponent spends those turns carving out territory, maximizing strategic control of the entire board, and ultimately winning the game.

This is the challenge the sea services face as they pursue the goals of the 2018 National Defense Strategy.1 As the United States embarks on a period of great power competition with potential adversaries, the Navy and Marine Corps are focused on achieving deterrence by denial through means of sea control and sea denial. While naval forces must be able to win a conventional conflict should one break out, the risk of escalation to a nuclear exchange puts a premium instead on convincing adversaries that conflict isn’t worth the risk. Defense planners seek this objective by constricting enemy maneuver and decision space, and by canalizing opponents toward de-escalatory off-ramps. While the risk of war is present, the goal is not to capture or kill enemy forces – it is instead to control territory to obtain a strategic victory without fighting – Sun Tzu’s acme of skill.

The littorals are home to key maritime terrain that will define this battle for control of the global commons. To date, the sea services have focused their efforts on developing mutually reinforcing operational concepts that will achieve sea control and sea denial in this space. Distributed Maritime Operations (DMO) seeks to mass effects without massing forces, mitigating the vulnerabilities of U.S. Navy ships at the outset of any potential conflict by placing them as stand-off forces outside of an enemy’s Weapons Engagement Zone (WEZ) until threats have been reduced or sea control is achieved.2 Sea control will be initially achieved by Expeditionary Advanced Base Operations (EABO), which will place Marine Corps teams as stand-in forces to persist forward inside the WEZ, where combinations of mobile sensors and shooters will deny enemy freedom of action in the maritime domain.3 With enemy A2/AD capabilities checked by stand-in forces, stand-off forces will once again enjoy freedom of maneuver in the area of operations. When applied to archipelagic defense, such as across the first island chain, these concepts are inherently about imposing high-threat chokepoints on an adversary from the littorals.

While bold and full of potential, EABO and DMO possess their own gaps. If naval forces were projecting the power of EABO and DMO on a Go board, or oban, there would be points where they would lack connectedness, and where an adversary would maintain liberties. To better explore means by which strategic chokepoints in the littorals can be controlled, the sea services must revitalize mine warfare.

Naval mine warfare (MIW) has played a significant role in every major American military conflict.4 If employed in support of sea control strategies under development by the Navy and Marine Corps, and should its full potential be leveraged by emerging technologies, MIW can serve as the lynchpin for deterring aggression in the maritime domain, and if necessary, for defeating adversaries at sea.

Where is Mine Warfare?

As sea control concepts, EABO and DMO are incredibly promising. They have generated great attention and energy from national security specialists and military thinkers, resulting in a high yield of thought pieces that have informed official military publications. This conversation has mostly focused on the integration of naval forces in support of DMO and EABO, new ways to employ existing capabilities for sea control, and what new capabilities need to be acquired or developed to provide sea denial.

But one topic that has not seen nearly enough discussion is the application of MIW in support of deterrence or denial. Most glaringly, official sea service documents are silent on the subject of MIW’s role in modern naval strategy. A Design for Maintaining Maritime Superiority 2.0, which was revised explicitly to align with the 2017 National Security Strategy and 2018 NDS, does not even include the word ‘mine,’ let alone any MIW related subjects.5 The Littoral Operations in a Contested Environment concept passingly mentions the need to consider command and control operations for Navy mine warfare capabilities, and only mentions MIW twice more but in terms of mine countermeasures, not Navy MIW employment.6 All other official sea service publications are similarly glib on the topic. The only solid connection between the potential for MIW in reference to deterring China is made in a 2015 Foreign Affairs article discussing archipelagic defense, years before the release of the current NSS and NDS.7

The absence of mine warfare in these discussions should be shocking to maritime strategists given the incredible historical utility of MIW. Mines have damaged or sunk more ships over the past 125 years than all other weapon systems combined.8 The lack of consideration for MIW preceding its decisive employment in America’s wars is the repetition of an old tune. To take one example, prior to the start of the Second World War, the U.S. Navy hadn’t built a minesweeper in its history.9 By the war’s end, the U.S. had laid thousands of mines which sank hundreds of Japanese ships, critically disrupting Japanese maritime shipping.10 After years of stilted progress in the Vietnam War, the mining of Haiphong Harbor was a critical factor in compelling America’s enemies to start negotiating for an end to the war.11

Today, the pendulum has swung back in the direction of limited consideration for MIW. The U.S. Navy has only two types of mines in its inventory, the aircraft-laid Quickstrike and the Submarine-Laid Mobile Mine (SLMM). And despite a military technology renaissance that is characterized by autonomous systems, human-machine teaming, and the Internet of Things (IoT), scant energy has been directed toward pairing disruptive technologies with MIW, let alone for the purposes of sea control or sea denial. The most recent Navy-sponsored innovations in MIW, the Quickstrike-J, Quickstrike-ER, and the Hammerhead, only allow for more precise deployment of existing mine capacity.

MIW can critically reinforce control of key maritime terrain, particularly at strategic chokepoints in the littorals. This is possible by understanding the potential that MIW brings to the sea control and sea denial strategies under development by the Navy and Marine Corps, and by employing current and emerging technologies to support the new and repurposed force design.

Employing Mine Warfare in Sea Control

A critical aspect of sea control strategy is the control of key maritime terrain. This includes any area, ashore or at sea, that when controlled enables influence over the maneuver of others conducted in, on, or around that area. Imagine a small, concealed team of Marines operating from an Expeditionary Advanced Base (EAB) somewhere in the South China Sea, armed with a long-range precision fires system with a threat range of 300 nautical miles. By virtue of its location and the influence its weapon system has on maneuver around its location, this EAB force is occupying key maritime terrain and executing sea denial. By the same token, a U.S. Navy surface ship with a threat range around the Straits of Malacca would similarly provide sea control at key maritime terrain.

In the sea control envisioned by naval planners to execute the 2018 NDS, most writers have described a series of interlocking, mutually reinforcing threat envelopes presented by naval forces, comprised of teams of Marines ashore operating out of EABs, and small, distributed Navy platforms afloat.12 Used in the context of deterring China, such archipelagic defenses would provide the U.S. and its allies with significant influence over areas such as the South China Sea and East China Sea, limiting Chinese freedom of maneuver, providing a check against Chinese A2/AD, and providing entry for U.S. stand-off forces. While highly promising, the concepts are largely reliant on the deployment and persistence of naval forces in threatening forward areas, providing a vulnerability that adversaries will undoubtedly seek to exploit. In this construct, the enemy maintains liberties.

This is where mine warfare can fill the gap, and provide stand-in forces with significantly enhanced flexibility and greater ability to control the sea. Used in concert with the sea control concept described earlier, naval mines can expand and more robustly interconnect the threat envelope presented by naval stand-in forces, and fill in the gaps between forward archipelagic defenses.