Why The Navy Refuses To Abandon The Harpoon Anti-Ship Missile 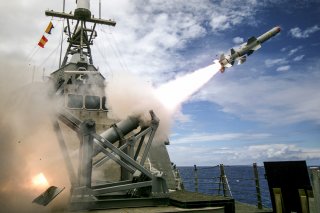 The Harpoon has a long and storied history in U.S. service. As the primary anti-ship armament of the U.S. Navy from the 1970s to the present, the Harpoon was involved in some of the only surface-to-surface engagements during the Cold War in Operation Praying Mantis.

Despite its successes, the time for the Harpoon’s time in service appears to be running out. Harpoons are being removed from Arleigh Burke-class destroyers, the U.S. Navy’s most numerous surface combatant.

The new Naval Strike Missile (NSM) appears to be the Harpoon’s replacement in some ways. It won the competition to be the next over-the-horizon anti-ship missile to arm the Navy’s Littoral Combat Ships.

But the Harpoon is still being purchased and upgraded. The new Harpoon Block II+ performed well at RIMPAC 2018 and is set to be procured into the near future.

So how does the new NSM stack up against the upgraded Harpoon? In what ways is the Harpoon becoming obsolete?

First of all, the NSM is smaller and lighter than the Harpoon. The Harpoon weighs in at almost 700kg for its surface-launched variant. The NSM is only 407 kg.

These weight difference also applies to the warheads; the Harpoon has a massive 224kg warhead to the NSM’s 100kg. However, the NSM is designed to have a programmable fuze that can select the best mode of detonation per target, as opposed to the Harpoon that simply uses a time-delayed contact fuze.

The latest Harpoon recently adopted is said to use a lighter warhead than the standard 224kg, but details are scarce.

The NSM is also said to be able to aim for the “weak spots” of a ship to maximize the damage of its smaller warhead.

Moving onto the guidance, the NSM uses a high-resolution infrared seeker to home in on specific portions of the ship. Guidance before the terminal stage is accomplished with inertial guidance, so the missile is not reliant on GPS and other technologies.

Conversely, the Harpoon has always had inertial guidance, but recent variants have added on GPS capability to allow the missile to navigate more accurately. Terminal guidance is provided with an active radar seeker that’s harder to jam and spoof, but less precise than an IR seeker.

The NSM though has some significant advantages that the Harpoon does not. The missile is said to be low observable, which combined with the completely passive infrared terminal mode may reduce the chances for an enemy ship to detect and react to the missile.

But perhaps a direct comparison between new Harpoon Block II+ and the NSM is unfair. While both missiles competed for the Navy’s frigate over-the-horizon anti-ship missile contract, each missile has different strengths related to their designs.

If current plans hold, both will be procured for different roles in the Navy.

The Harpoon Block II+ is being procured as an air-launch missile for the Navy’s Super Hornet fleet. For instance, most tests involving the missile have been focused on integrating it with the Super Hornet.

In contrast, the NSM is being procured for the Navy’s Littoral Combat Ships and future frigates. These smaller ships probably need a smaller, “smarter” missile that’s lighter and designed to be integrated into small ships. The NSM was originally designed for the Royal Norwegian Navy to arm its own class of small frigates, so its suited for that role very well.

While the NSM’s range is listed as over 200km, it likely is not as far as the 248km some analysts claim the Harpoon Block II+ will reach. The Harpoon also probably still is more lethal with its bigger warhead against larger enemy ships.

As such, the new Harpoon is likely to remain the powerful “long arm” of the Navy. Its proper replacement is likely to come in the form of the AGM-158C LRASM, a big long-range stealth anti-ship missile.

Meanwhile, the NSM is likely to become the U.S. military’s primary anti-ship missile for smaller platforms, including trucks operated by the Army. For example, the U.S. Army launched an NSM and hit a target at RIMPAC 2018, which might indicate that the Army might be interested in the missile as a way to defend islands in the South China Sea.

Charlie Gao studied political and computer science at Grinnell College and is a frequent commentator on defense and national security issues. This after first appeared two years ago.