Why the Navy's F/A 18 Super Hornets Are Getting Cut 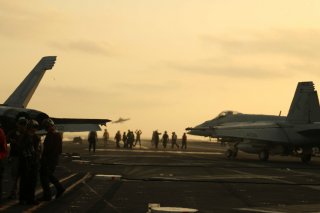 Here's What You Need To Remember: This would bring to an end the F/A-18 program that began in the 1970s with the development of the McDonnell Douglas designed twin-engine F-18 fighter and attack aircraft.

Peter Suciu is a Michigan-based writer who has contributed to more than four dozen magazines, newspapers and websites. He is the author of several books on military headgear including "A Gallery of Military Headdress," which is available on Amazon.com. This article first appeared last year.