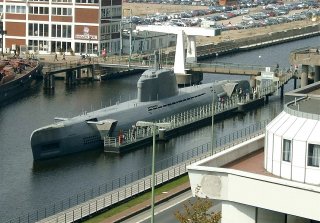 Here's What You Need to Know: The Type XXI provides several lessons in how technology—while important—doesn’t alone win wars. It’s also a lesson in how the fanatical pursuit of advanced weapons can make winning wars a lot harder.

As the war turned against Berlin, the Nazi commanders accelerated the development of new weapons, which distracted from other areas. Then the war worsened, accelerating new weapon development further in a perverted, vicious cycle.

However, the Type XXI would last through the Cold War. Some were used for target practice. Others were captured and commissioned into the Soviet and French navies. The only surviving vessel of its class today is the Wilhelm Bauer, which the modern German navy converted into a research vessel. It’s now a museum ship in Bremerhaven.