Why Normandy Never Got Over D-Day 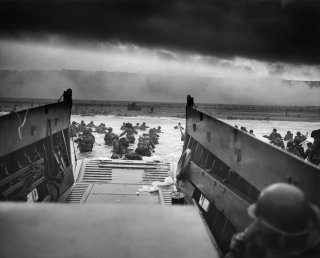 Here's What to Remember: Just before midnight the night before, hundreds of airplanes could be heard flying south over the Cotentin.

In Guidel, Brittany, a priest lamented the destruction of his beloved church, but reminded himself that its cemetery was the resting place for 137 Allied soldiers. “We consider the brave, selfless sacrifice of these generous soldiers,” he wrote, “as a clear assurance that Guildel will rise from the ashes.”

For Normans, D-Day began with noise.

Just before midnight the night before, hundreds of airplanes could be heard flying south over the Cotentin. Thousands of Normans woke to the “a ceaseless storm”—the rumble of plane engines and the distant roar of artillery. Soon the night was filled with strange sights as well as sounds: the landing of parachutes and gliders, the dancing lights of artillery, the red glow of villages in flames. These sights were frightening, but also oddly beautiful. Madame Hamel-Hateau, a schoolteacher who lived near Sainte-Mère-Église, was just falling asleep at midnight when she began to see “fantastic shadows, somber shapes against the clear blackness of the sky. Like big black umbrellas, they rain down on the fields across the way, and then disappear behind the black line of the hedges.” These umbrellas were, of course, paratroopers arriving to illuminate landing areas. They were the first Americans in France. In the days and weeks to come, Normans would not only feel the full force of war, but also realize the high price of their freedom.

The 70th anniversary of D-Day will be commemorated around the world, but perhaps nowhere more importantly than where it actually happened, in the rural towns and roads of Normandy. There the long-awaited liberation meant hope. The French had been waiting for days, months, years. Pierre Ferrary and his wife, Yvonne, were stunned when they looked out their back window and discovered ships in every shape and color, thousands of them approaching the Norman shore. “We throw ourselves in each other’s arms; we embrace each other. It is D-Day and H-Hour. All our hopes are finally being realized!” For some it was too good to be true. “No!” Michel Béchet told his diary that famous Tuesday, “It’s unbelievable that the landings happened today, simply because it is too beautiful to be true!” But it was true, and before long, no one could doubt it.

Although D-Day has always figured as an “American” or “Allied” event, in fact the French greatly contributed to the victory, committing themselves to small but substantial acts of courage. Hamel-Hateau, for example, rushed out into the night to meet her liberators; then, at great danger to herself, escorted them to their proper drop point some kilometers away. Because of inaccurate navigation, planes had dropped the soldiers in the wrong places. Hundreds were not only lost but injured by calamitous jumps. Normans took care of these soldiers as best they could, hiding them and rescuing their equipment so as not to raise German suspicions. In the small village of Graignes, civilians provided food, first aid and intelligence to a small group of stranded GIs. As the soldiers celebrated mass on the following Sunday, a local woman burst into the church to warn the congregation that an SS column was on its way. The outnumbered Americans soon ran out of ammunition, and all but a handful were killed. To teach the French a lesson, the SS brutally murdered the two village priests, along with several other men and women.

These Frenchmen were not alone in their sacrifice. Some nineteen thousand Normans were killed in the summer of 1944. Hundreds of thousands more French men and women lost their homes and possessions. In order to stop German troops from rushing northward into the Cotentin peninsula, Allied planners sought to destroy the transport arteries of Norman cities, including Caen, Lisieux, Condé-sur-Noireau, Argentan, Saint-Lô, Vire, and Coutances. To do so, they argued, these towns had to be decimated by bombing, their ruins transformed into choke points. Many Allied commanders considered it unacceptable to target cities with large civilian populations, historic sites, and absolutely no military installations. The Allies dropped warning leaflets, but weather scattered most of these fragile missives. On the evening of June 6, the targeted cities were bombed first by the Americans, then by the British. By dawn the next day, entire cities had ceased to exist, and thousands of Normans were dead.

The liberators had brought the war with them. But then again, the war had brought the liberators. Our movie image of the GI—tall, heroic and funny—was not far from the truth for the Normans. The Americans were “tall as buildings” and “solid as bombs.” They were dirty and dusty; they looked tired; their teeth were white. They did not look at all like each other. One Norman was astonished to realize that the first two Americans he met were Italian and Scandinavian. What then was “American”? Not surprisingly, children were the first to open their hearts to the GIs. The GI lap became a valuable piece of real estate for the smallest Normans. It did not hurt that the soldiers had big pockets bursting with candy and chewing gum. Children also appeared with large eyes and empty spoons at the windows of makeshift mess halls. They could depend on the GIs to take more than they needed for dinner, then share food.

It took many years for Normans to grieve the losses of the summer of 1944. On VE day in May 1945, there were many empty chairs at Norman dinner tables. By then, even relations with the GIs had begun to sour, as black market corruption, prostitution and violent behavior troubled garrison towns like Le Havre. Reconstruction was painfully slow; damage often irreparable. Still Normans remained grateful for their liberation. They made sense of the ruins by framing them within the larger context of Allied sacrifice. In Guidel, Brittany, a priest lamented the destruction of his beloved church, but reminded himself that its cemetery was the resting place for 137 Allied soldiers. “We consider the brave, selfless sacrifice of these generous soldiers,” he wrote, “as a clear assurance that Guildel will rise from the ashes.”

Mary Louise Roberts is the author of D-Day through French Eyes: Normandy 1944 and What Soldiers Do: Sex and the American GI in World War II France. She teaches history at the University of Wisconsin-Madison.

This article by Mary Louise Roberts originally appeared at War is Boring in 2014 and is being republished due to reader interest.