Why North Korea's Infantry is Essential to its National Defense 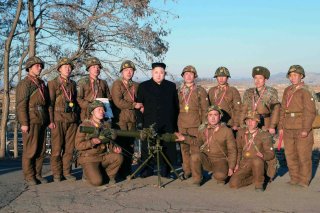 Here's What You Need to Remember: The guns of the KPA Ground Forces help ensure North Korean sniper, airborne, and marine infantry units remain operationally relevant now and into the near future. Whether this impoverished country with an economy smaller than Panama’s can arm their infantrymen as well as their American and South Korean counterparts, while simultaneously affording an expanding nuclear arsenal is another question.