Why the PAK DA's Greatest Threat Is Russia's Tu-160 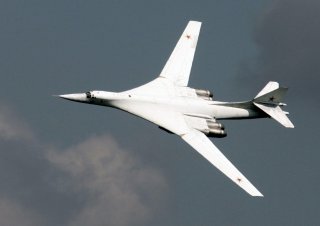 Here’s What You Need to Remember: For now, despite a full-sized wooden mock-up and talks of a prototype under construction, Russia’s PAK DA exists as little more than another Russian paper plane. Whether or not it someday becomes more remains to be seen.

The Russian government recently announced that construction has begun on prototypes for their forthcoming stealth bomber, being developed under the name PAK DA. That means the field of low-observable bombers is promising to be more crowded than ever by the close of the 2020s, with the United States, Russia, and China all planning to field new platforms within the next nine or so years.

Earlier this week, the guys over at The Warzone broke that the U.S. is in the final stages of assembly on no fewer than five B-21 Raiders, placing America squarely in the lead in the race to field the first new stealth bomber since 1989. Today, the United States is the only nation on the planet with a stealth bomber in service, as well as two different stealth fighters, in the F-22 Raptor and F-35 Lightning II.

But America’s lead in stealth aviation is beginning to erode, thanks in no small part to two decades worth of wars fought against opponents with limited or no air defense capabilities. While the F-35 has continued to mature during this time, it was the only stealth platform to enter service for the U.S. during the era of the Global War on Terror. Today, America’s stealth jet designs are all over a decade old, with the stealth bomber B-2 Spirit the oldest by a significant margin.

During America’s anti-terror efforts, its nation-level opponents in Russia and China have worked feverishly to offset America’s technological edge, fielding their first stealth fighters for test flights 2010 and 2011 respectively. Today, both nations have stealth bomber programs in development, and according to governmental claims, the Russian PAK DA program is a bit further along than China’s H-20, with Russia’s bomber slated to enter service in 2027, and China’s before the end of the decade.

The PAK DA is intended to serve as a long-range, low observable strategic bomber for the Russian Air Force, but within the broad definitions of these terms lies a vast spectrum of actual combat capability that won’t fully manifest until the aircraft enters service. In other words, analysis of the PAK DA is limited by the fact that this bomber doesn’t really exist yet, and as such, it may be subject to both intentional propaganda and unintentional misconception in open-source outlets.

According to TASS, a media outlet owned by the Russian government, the new bomber will utilize a flying wing design much like America’s B-2 Spirit and forthcoming B-21 Raider. It will be a subsonic platform with heavy payload capabilities that will include cruise missiles, precision bombs, and hypersonic weapons.

To date, Russia has completed construction on a full-size wooden mock-up of the aircraft, as well as full and scale models of potential cockpit layouts. A number of smaller composite models have also been built for wind tunnel testing. Last month, Russia announced work on their first prototype aircraft with plans to begin test flights in 2023, making their 2027 in-service goal possible, if still unlikely.

How Stealthy Will It Be?

Russia is on the extremely exclusive list of nations to develop a stealth aircraft program domestically and put it into service, sharing that distinction with only the United States and China. However, not all stealth competitors are created equal. Russia’s stealth technology is widely considered to be lagging behind its American and even Chinese competition. The nation’s only operational stealth fighter, the Sukhoi Su-57, is likely the least stealthy 5th generation fighter in service today, and the outlook isn’t much better for the PAK DA.

Stealth, of course, isn’t a single technology, but rather a whole slew of overlapping technologies, production methodologies, and combat tactics all combining to limit or prevent the detection of an aircraft flying through contested airspace. In the 21st century, stealth aircraft must take pains to limit their radar return, mask the immense heat produced by their engines (susceptible to infrared detection and targeting), and include some degree of electronic warfare or jamming capabilities.

The PAK DA leverages a flying wing design, similar to Northrop’s B-2 Spirit and forthcoming B-21 Raider, for good reason. With few protruding wings or fins and no hard angles to reflect radar back at the transmitting array, the B-2 is likely one of the stealthiest aircraft in the sky today, capable of defeating even low-frequency radars stealth fighters often cannot. By following on this path, the PAK DA has a solid start.

However, Russia’s stealth is limited by its ability to mass-produce aircraft with the extremely tight production tolerances required of a stealth fighter or bomber. Seams between body panels can create a radar return just like an open weapons bay door can (which is how an American F-117 was shot down by a 1950s era surface-to-air missile).

Russia isn’t unaware of its shortcomings in the stealth department, and as such, the nation’s air warfare doctrine doesn’t mirror America’s reliance on defeating or delaying detection. While the U.S. prioritizes stealth first (or at least close to first) in the development of these platforms, Russian engineers view stealth as just one of a number of important elements, and arguably not one worth prioritizing at the expense of more conventional goals regarding speed or maneuverability.

In fact, statements already made in Russian state media suggest that the PAK DA may not be that stealthy at all, explaining the aircraft will use long-range munitions to carry out its mission without ever leaving the protective bubble of Russian air defense systems.

“Today, Russia’s air force has received the powerful X-555 and X-101 long-range missiles that can fly 5,000 km (3,106 miles), which is why there is no more need for long-distance bombers,” Vadim Kozulin, a professor at the Academy of Military Science in Moscow, told Kremlin-owned Russia Beyond. “Now the strategic bomber can carry out its mission basically without leaving Russian borders and remaining under the protection of air defense systems.”

What Kinds of Weapons Will the PAK DA Carry?

Reports of the anticipated payload capabilities of the PAK DA vary significantly from source to source, which may speak to a lack of internal communications within the Russian Ministry of Defense or a shift in design sometime between 2016 and today. Early reports claimed a 30-ton internal payload capacity (60,000 pounds), while more recent ones claim an even more impressive 40 tons (80,000 pounds).

To put that payload into comparison with its competition, the forthcoming American stealth bomber, the B-21 Raider, is expected to carry just 30,000 pounds, while the in-service B-2 Spirit can carry 40,000. America’s non-stealth bombers, the supersonic B-1B Lancer and long-serving B-52 Stratofortress, can carry 75,000 pounds and 70,000 pounds respectively. In other words, this new Russian stealth bomber is expected to be big. This comparatively large payload capacity may be why Russian officials have claimed their new bomber will “exceed” the capabilities of the B-21.

Per Russian reports, the PAK DA will be capable of carrying a wide variety of conventional and nuclear ordnance. It’s also expected to network with airborne drones in some way, though details about that effort remain scarce. Although the stealth of this bomber may be questionable, it remains likely that all of these munitions will be carried internally. Among the array of weapons available will be the latest hypersonic missiles Russia has in development. The first will undoubtedly be the Kinzhal. A source in the Russian aircraft industry told Russia’s state-owned Tass, "Currently, the experimental model is being built. The demonstration model will be ready by 2023...The subsonic PAK DA will be armed with hypersonic weapons. Besides, its flight will be aided by drones."

The Kh-47M2 Kinzhal is an air-launched hypersonic ballistic missile with a claimed range of over 2,000 kilometers (about 1,243 miles) and a claimed top speed in excess of Mach 10 (or about 7,672 miles per hour). The missile can carry either conventional or nuclear warheads, with a maximum nuclear yield of about 500 kilotons, which is more than 30 times as powerful as the atomic bomb dropped on Hiroshima at the end of World War II.

Last month, Russia announced the development of another air-launched weapon likely to find its way into the payload bay of the PAK DA, the Kh-95 long-range hypersonic missile.

Does the PAK DA Pose a Real Threat?

Stealth bombers like the B-21 Raider and Russia’s PAK DA offer a different kind of capability than stealth fighters, flying completely different mission sets than you’ll find even among air-to-ground focused fighters like the F-35. The B-21 Raider, for instance, is expected to have global strike capabilities, the most advanced stealth technologies ever fielded, and a payload many multiples of that carried internally by fighters maintaining their stealth profile. Because of their specialized role, long-range bombers like these are often referred to as “strategic” bombers.