Why Pelosi Took a Long Shot on the 25th Amendment 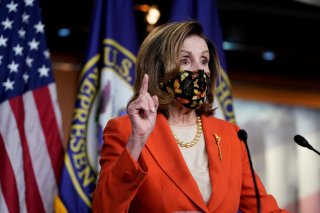 We keep hearing that this is a rushed impeachment, but the House leadership seems to think there’s plenty of time for a frolic and detour before getting to the main event. Before considering an article of impeachment based on President Trump’s January 6 pre‐​riot rally speech, they’re going to vote on a toothless, hortatory resolution urging Vice President Mike Pence to do their jobs for them. Specifically, the resolution calls on Pence and a majority of Trump’s cabinet to trigger Section 4 of the 25th Amendment, making Pence “acting president” for the remainder of Trump’s term.

In her letter announcing the move, Speaker Nancy Pelosi (D-CA) proclaims that “In protecting our Constitution and our Democracy, we will act with urgency, because this President represents an imminent threat to both.” The House plans to vote on that resolution sometime today, probably, “Tuesday evening at the earliest,” anyway—hey: get off our backs, man!

It’s hard to fathom the logic here, either legally or politically. The Constitution gives the House gives the House the “sole Power of Impeachment.” But the 25th Amendment gives it no direct role in the initial decision to remove. Congress comes in after that decision has been made: receiving notice that the VP and a majority of the cabinet have deemed the president “unable to discharge the powers and duties of his office,” and, some three weeks later, deciding, by supermajority vote in both houses, whether that was the right call (in this case, the clock would run out before that vote).

Nor do I see how the resolution is supposed to make the vice president more likely to trigger Section 4. Does the House leadership know something about Mike Pence’s psychological motivations that’s not apparent to the rest of us? Are they engaged in some sort of advanced game theory or extradimensional chess?

From my limited vantage point, Pelosi’s gambit looks like a waste of time or worse. The vice president’s “servant leadership” approach to his office has often bordered on servility. Pence has long been so reluctant to risk Trump’s ire that it was a genuine and welcome surprise when he refused the president’s anti‐​constitutional demand to toss out electoral votes for Joe Biden. Becoming the first vice president in history to trigger Section 4 and defenestrate a president is a much bigger deal. If Trump riling up a lynch mob against him hasn’t motivated Pence to whip the cabinet and make that move, what would? I’m pretty sure of what wouldn’t: an unenforceable “ultimatum” from the House. Whatever inclination Pence had to trigger section 4, he’s less likely to do it if it’s going to look like Nancy Pelosi forced his hand.

This late in the game, removing Trump via a Senate trial is no longer possible. The best argument for impeachment by the House is its constitutional‐​censure function: making him the only president in history to wear “a second Scarlet I.” Only the “25th Amendment Solution” could bring his presidency to an early end. As it happens, the two remedies aren’t mutually exclusive.

If last Wednesday wasn’t “Peak Trump,” and the president is bent on further abuses, perhaps Pence can muster the, er, “extreme courage” it would take to trigger Section 4. Meanwhile, the House should stay in its lane and stick to the job the Constitution assigns it.