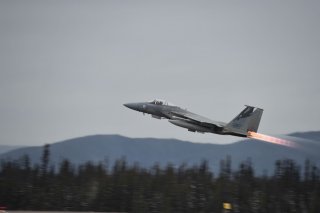 Here's What You Need to Remember: The decision for the Air Force to purchase new aircraft, even as it costs more per plane than modernizing the legacy F-15s, is based on the fact that the F-15EX would yield more “future life,” and would also avoid the cost of some or all of the upgrades.

Recently, it was reported that the Boeing F-15EX will not be required to go through key survivability tests, as the Office of the Secretary of Defense has waived such tests and in turn could save $108 million and reduce the testing schedule by at least a full year.

According to Inside Defense, based on obtained Pentagon memos, the waiver was approved by former Pentagon acquisition chief Ellen Lord in January just days before she left her post.

The Trump administration had proposed to buy eight of the highly upgraded and modernized F-15EX for $1.1 billion last September, the first of an installment toward a planned initial purchase of 144 aircraft. The Air Force had sought to acquire the aircraft, which is an updated version of the F-15 Eagle air superiority fighter jet that was first introduced in 1974. The F-15 has subsequently evolved to encompass more roles, most notably with the deployment of the F-15E Strike Eagle in 1989, when it saw the addition of substantial air-to-ground capability, including a second cockpit for a weapons systems operator.

The Air Force’s current fleet includes 453 F-15s of all variants, the last of which were ordered in 2001. Since that time, the F-15s have continued to be produced for a variety of international customers including Israel, Saudi Arabia and Japan.

The decision for the Air Force to purchase new aircraft, even as it costs more per plane than modernizing the legacy F-15s, is based on the fact that the F-15EX would yield more “future life,” and would also avoid the cost of some or all of the upgrades. It would also allow the Air Force to retire the oldest aircraft. With the Air Force then receiving new F-15EXs those planes could be flying for decades to come, while Air Force has estimated F-15EX fighter shares about 70 percent of parts with the current F-15Cs and F-15Es that they will be replacing. Not only are the original production lines in St. Louis still in place, but the training facilities, maintenance depots, and other infrastructure can be also be readily shifted to F-15EX support.

The question now is whether corners are being cut to get the F-15EX program in high gear.

As Inside Defense noted, the decision to issue the survivability test waiver could leave open the question of how survivable the F-15EX is against modern surface-to-air missiles, such as those being employed by near-peer adversaries including China and Russia. Additionally, both countries continue to export those air-defense systems, which means the F-15EXs could face significant threats around the globe as those platforms have significantly increased in lethality significantly since 2008, which was the last time full-up vulnerability testing was conducted.

This could serve as an example as to where the Air Force may be overthinking its decision not to stick with the plan to only move forward with true fifth-generation aircraft such as the Lockheed Martin F-35 Lightning II. While the F-15EX could be more cost-effective, there are those who don’t see the logic in opting for the older platform, especially as those aircraft would be in the skies for years to come and could be easily outclassed by more advanced weapons systems.

“5th gen fighters, I would tell you, are the backbone of any of our planning for a crisis forward in the theater and would be needed at dispersed locations within the first and second island chains,” Adm. Phillip Davidson was quoted by Inside Defense during a Senate Armed Services Committee Hearing on the status of United States Indo-Pacific Command.