Why Is the Pentagon Wasting Money on Nuclear Weapons and Space? 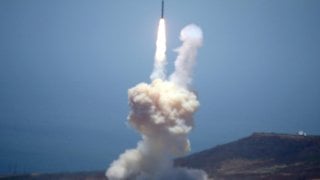 This year’s proposed budget of $740 billion for the Pentagon and related programs is one of the highest levels of defense spending since World War II, higher than spending during the Korean or Vietnam Wars or the peak of the Reagan buildup. Spending this much money on traditional military capabilities is out of sync with the world we now live in, where pandemics, climate change, and extreme inequality pose the greatest challenges to our safety and security. Our military should be smaller, have fewer missions, and be structured around different priorities.

This analysis is adapted from the report of the Center for International Policy’s Sustainable Defense Task Force, a group of ex-White House, Pentagon, and congressional budget officials; former military officers; and think tank experts from across the political spectrum. Key elements of the task force’s approach include an end to endless wars and the global military reach they require; a more realistic view of the challenges posed by Russia and China; greater reliance on allies to defend against risks in their home regions; a diplomacy-first approach to regional challenges, like Iran and North Korea; a deterrence-only nuclear strategy; and the elimination of waste and unnecessary bureaucracy at the Pentagon. The cuts outlined below represent a down payment on the savings that could be yielded by taking this approach.

Reducing force structure. Any substantial savings in Pentagon spending will require a reduction in the size of the force, which can set the stage for reduced costs on personnel, health care, equipment, and facilities. The current force should be reduced by at least 10 percent—approximately 140,000 personnel—with half of that number coming from reductions in overseas deployments. In keeping with a less interventionist strategy that relies less on nation building and wars of occupation, the biggest cuts should come from the Army and Marines. Total savings from this approach would be on the order of $530 billion over 10 years.

Rolling back nuclear modernization. A deterrence-only nuclear strategy, like the one developed by Global Zero, would allow for substantial cuts in the Pentagon’s 30-year, $2 trillion nuclear modernization program, including the elimination of ICBMs and reductions in the bomber and submarine forces. Savings from this approach would be an estimated $100 billion over ten years.

Eliminating excess bureaucracy. The Pentagon currently employs more than 600,000 private contractors, many of whom do jobs that are either redundant or could be done more cheaply by government employees. As the Project on Government Oversight has noted, a 15 percent cut in spending on private contractors could save $262.5 billion over the next decade.

Ending the Space Force. The Space Force creates a new, unneeded bureaucracy while increasing the prospects for the militarization of space, which would put U.S. economic and military space assets at greater risk than a policy that seeks cooperation and clearer rules of the road for space operations. Eliminating the Space Force would save roughly $15 billion over the next decade.

Eliminate outmoded or ineffective weapons systems. Aircraft carriers are expensive, vulnerable to missile attack, and unnecessary in current numbers in the absence of a strategy that relies on the ability to intervene anywhere in the world on short notice. The U.S. should stop buying new aircraft carriers and reduce the force from 11 to 7 over time. The F-35 Joint Strike Fighter may never be ready for high-end combat—the program should be scaled back in keeping with the reduction in force structure outlined above, and the total buy should be reduced, with projected F-35s replaced with upgraded versions of current generation aircraft. These two changes would save a minimum of $40 billion over the next decade.