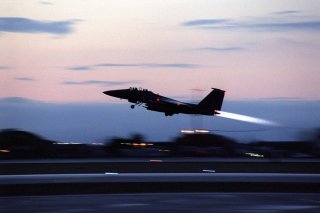 Here’s What You Need to Remember: Stealth does not make an aircraft invisible to radar, nor is radar the only way aircraft are targeted.

The world’s first operational stealth aircraft, the F-117 Nighthawk, made a surprise appearance in Fresno, California this week, despite being officially retired since 2008. The Nighthawks, which were spotted alongside F-15 Eagles from the 144th Fighter Wing, made the trip to square off against the air superiority jets in what are expected to be training missions meant to prepare the Air National Guard’s F-15s and their pilots for the threat posed by stealthy foreign fighters like China’s J-20 and Russia’s Su-57.

For years now, the long-retired F-117 Nighthawk has been spotted in the skies over the Southwest United States, serving as largely un-acknowledged aggressor platforms in training flights against America’s fighters. Despite the somewhat frequent reports of these aircraft, often spotted flying in what look like mock dogfights against other fighters, the Air Force has largely opted not to formally acknowledge their roles, or even their presence, in these flights. This week’s surprise F-117 arrival in Fresno, California then marks what may be the first time Air Force officials have gone on record regarding the use of these unusual aircraft who are likely operated by contractors, rather than active duty Air Force pilots.

The 144th Fighter Wing of California’s Air National Guard, which once operated F-16 Fighting Falcons, transitioned to flying only F-15Cs and F-15Ds in 2013. America’s F-15s are air superiority fighters, meaning that although they’re capable of air-to-ground operations, they specialize in air-to-air combat. As such, it seems likely that the F-117s spotted in Fresno will be squaring off with the Eagles in the sky, rather than training side-by-side as air support for a strike operation.

However, it’s important to note that despite air-to-air training being the most logical explanation for the F-117 Nighthawks’ arrival in Fresno, the Air National Guard has not confirmed that assertion.

Sandboxx News received permission from Instagram user corryismigratoryman to post this picture he snapped of one of the F-117 Nighthawks flying alongside two local F-15s.

What Is an Aggressor Aircraft?

Aggressor (sometimes called adversary) aircraft serve as the opposing force in air combat training operations and military war games. In effect, they play the bad guys when America’s fighter pilots and air defense service personnel are training for a near-peer conflict with a nation like China or Russia.

Aggressor aircraft can sometimes be the very same platforms operated by opposing forces, like America’s now-famed Red Eagles aggressor squadron that once operated Soviet MiGs of varying types from 1977 to 1988. Of course, that’s not always the case, and often aggressor pilots fly in American or allied jets while mirroring the tactics and sometimes the flight characteristics of opponent forces. Often, these aircraft will even be painted to match the paint schemes found on enemy aircraft, to make the experience that much more realistic for the pilots in training.

You may not realize it, but you’re probably already quite familiar with that approach thanks to the 1988 movie, “Top Gun.” The seemingly terrifying MiG-28 Maverick and Goose found themselves flying against never actually existed at all. The Soviet Union never developed a MiG-28–the aircraft was played by the American-made Northrop F-5 Tiger II.

Why Use the F-117 Nighthawk As an Aggressor?

Despite recent reports that the F-117 Nighthawk did carry air-to-air weapons, the truth is, the famed “stealth fighter” was never a fighter at all. The F-117 was an attack aircraft, meaning it specialized in air-to-ground engagements and possessed no onboard radar, guns, or air-to-air missiles. In fact, the Nighthawk could carry a maximum payload of two 2,000 pound bombs and really not much else. Lockheed Martin did propose an air-to-air capable iteration of the Nighthawk in the F-117N Seahawk that would have served on the Navy’s carriers, but the effort never came to fruition. You can read our full feature on that proposal here.

So why would you use the F-117 as an aggressor for air combat drills if it has no air-to-air capabilities?

Well, to put it simply, it doesn’t really matter if the Nighthawk could actually shoot an opponent down for these types of exercises. The real point behind leveraging the now 40-year-old stealth jet as an aggressor is almost certainly all about training to locate and target stealth platforms in the sky.

Stealth does not make an aircraft invisible to radar, nor is radar the only way aircraft are targeted. The truth is, stealth is an overlapping series of technologies, production methodologies, and combat tactics that are all intended to delay detection and inhibit air defense systems from getting what’s called a “weapons-grade lock” — or a sufficient lock to really shoot an aircraft down.

Low-frequency radar has long been able to spot stealth aircraft in the sky, but isn’t accurate enough to actually target one. Nonetheless, infrared-guided (heat-seeking) missiles can still sniff out the masked jet exhaust pouring out of the back of these aircraft, and of course, pilots can see them with their naked eye if they find themselves within visual range.

As the folks over at The Warzone have pointed out in the past, many of America’s 4th generation fighters, non-stealth jets like the F-15, have already been equipped with active electronically scanned array (AESA) radars designed specifically to aid in targeting the tiny radar cross-sections common to stealth aircraft and even cruise missiles. In other words, these pilots have the gear — and now they’re getting the training.

This article first appeared in Sandboxx and is being reprinted due to reader interest.