Why Russia Is Helping Belarus with S-400 Costs 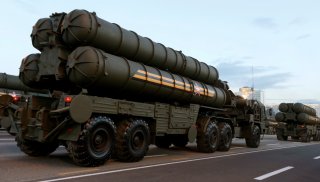 Here's What You Need to Remember: In sum, the Kremlin is giving Minsk the money to buy its S-400 systems at a subsidized rate reserved for Russia’s domestic forces. Though the commercial wisdom seems dubious at best, the strategic benefits of this deal are much more readily apparent. S-400 systems fielded in westernmost Belarus will give Russian-aligned missile defense forces increased coverage.

Belarus is set to join the growing ranks of S-400 importers, enhancing the Russian missile network’s performance against Ukraine and NATO’s eastern fringes.

During an eight-hour long press conference earlier this month, Belarusian President Lukashenko revealed that Minsk is in an advanced stage of negotiations with the Kremlin to purchase an unspecified number of S-400 “Triumf” missile defense systems.

“We are in a dialogue with Russia in order to get S-400 systems delivered to Belarus. President of Russia Vladimir Putin has been asked to allow us to buy them at a bulk price, on credit,” he said.

“[The] S-300 systems are good and we've learned how to upgrade them and restore them,” Lukashenko added. “However, we have a strong interest in S-400 systems. I am convinced we will get these systems.” The Belarusian military is believed to currently operate as many as one dozen upgraded S-300PS systems. It is unclear if Minsk is seeking the additional S-400 regiments from Russia as a replacement, or a complement, to its active S-300 roster.

Belarus has lobbied for years to secure an S-400 contract with Russia, but was passed up in favor of more lucrative export deals with China and then Turkey. Belarus has not gotten any richer in recent months, with Lukashenko himself admitting that his military still lacks the budget to purchase the missile systems outright. "This issue was raised before the president of Russia so that the S-400s can be delivered to the Republic of Belarus at a reasonable price on a loan because we do not have such money," he said. The Belarusian President was referring to the $1 billion loan to Minsk, split into two $500 million tranches, that was approved by Moscow in December 2020. Lukashenko appeared to suggest that the loan was conditioned, whether explicitly or implicitly, on Belarus’ procurement of a certain number of S-400 units. He noted that Belarus will purchase the S-400 at “internal Russian prices”—that is, the same price that would have been paid by Russia’s own military.

In sum, the Kremlin is giving Minsk the money to buy its S-400 systems at a subsidized rate reserved for Russia’s domestic forces. Though the commercial wisdom seems dubious at best, the strategic benefits of this deal are much more readily apparent. S-400 systems fielded in westernmost Belarus will give Russian-aligned missile defense forces (Russia and Belarus are a Union State with partially overlapping military infrastructure) coverage over large swathes of southern Poland that are out of range of the S-400 regiments currently stationed in Russia’s Central European enclave of Kaliningrad. By the same token, S-400’s deployed along Belarus’s southern periphery will offer sweeping coverage over the parts of Northern and Western Ukraine that are out of range of the S-400 systems being kept in Russian-annexed Crimea. Proliferating the S-400 to Belarus will help to plug several large holes in Russia’s western missile defense network, enhancing Moscow’s deterrent and offensive capabilities against NATO’s eastern flank as well as Ukraine.