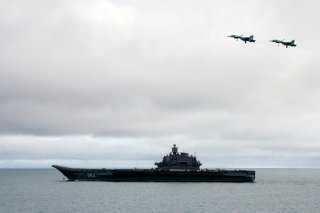 Here's What You Need to Remember: Countries that Moscow regards as peers or inferiors operate carrier fleets of one type or another. The Russian Navy, therefore, must field its own carrier.

Fire aboard ship is never funny. Not to anyone who has served aboard ship and witnessed firsthand the perils of operating a metal box brimming with flammables and explosives amid the salty waste that is the sea. Even prospective foes deserve sympathy—not mockery. On Thursday Russia Today reported that the aircraft carrier Admiral Kuznetsov, Russia’s lone flattop, was ablaze at its berth in Murmansk while undergoing repair work. Six people were reportedly injured. Another is missing.

All good wishes to the Kuznetsov crew and shipyard workers.

Evidently the carrier suffered what the U.S. sea services call a “class B” fire, a conflagration fueled by flammable liquids. A class B fire in a propulsion engineering compartment—a “main-space fire” in American parlance—ranks among the most feared cataclysms that can befall a vessel. Thirty years ago, for instance, the U.S. Navy combat logistics ship White Plains was engulfed by a main-space fire while transiting the South China Sea. Six sailors fell during the maelstrom. Five more were injured.

Yet shipboard catastrophes are instructive, however sad, and Kuznetsov’s travails are no exception. Commissioned during the late Cold War, this is an aging ship of war. The former Soviet Navy sat rusting at its moorings during the first decade of its service life, when Moscow had too little money to pay sailors, let alone maintain or upgrade hardware. It’s also decrepit. The carrier is notoriously unreliable from an engineering standpoint. It belches black smoke on its best day—a sure giveaway.

And to all appearances, Kuznetsov is a hard-luck ship. A fleet tug keeps company with the carrier during its rare underway periods, just in case it breaks down and needs a tow. Preemptively dispatching roadside assistance is a tacit vote of no confidence from the admiralty. Last year the flattop’s drydock—the only Russian dock of its kind—sank underneath it, leaving Western commentators wondering whether it had a future. After all, no fighting ship rides the waves for long without regular overhaul.

Kuznetsov, in other words, is a wasting asset. Why not decommission it and invest the savings in modern warships rather than throw good money after bad?

The answer has less to do with naval warfare than national honor and renown. Two reasons stand out. First, Admiral Kuznetsov is Russia’s only aircraft carrier. Retire it and Moscow is out of the carrier-aviation business for the first time in decades—an intolerable setback for its quest to make Russia great again. There’s a circular character to this reasoning. Russian patriots are acutely aware that great powers operate carriers; Russia wants to be known as a great power; therefore its navy needs carriers.

Think about it. Every permanent member of the UN Security Council deploys at least one flattop. And India, Brazil, Japan... countries Moscow regards as peers or inferiors operate carrier fleets of one type or another. The Russian Navy, therefore, must field its own carrier contingent lest the nation be demoted to second-class status—or worse. Kuznetsov is the only hull on hand, and thus it commands surpassing value. It’s tantamount to a talisman of Russian high-seas prowess.

Parting with it is hard no matter its material defects.

Second, the flattop is named for a hallowed figure from Russian maritime history, Fleet Admiral Nikolay Kuznetsov. Among the admiral’s achievements were readying the Soviet Navy for the Nazi German attack in 1941. He proceeded against instructions from the high command. As a result the navy was the only service on a full combat footing during the German onslaught and fared well by contrast. Retiring his namesake after a disaster would be like retiring his legacy under shameful circumstances.

My old German History professor Holger Herwig once dubbed imperial Germany’s High Seas Fleet a “luxury fleet.” Kaiser Wilhelm II, that is, invested exorbitantly in armored battleships and their consorts even though the Reich, a natural continental power, had little need for such a fleet. A luxury is something of secondary importance by definition, yet making it a political, historical, or cultural emblem imbues it with outsized importance to the nation.

The Kaiser and his lieutenants used the idea of a High Seas Fleet to rally popular sentiment behind a grand imperial adventure. Having promised ordinary folk such an adventure and its rewards, officialdom bound itself to keep pouring resources into battleship construction—even as dangers gathered along Germany’s land frontiers during the years antedating World War I. Those resources could have gone to the army. They could have gone to build unsexy—but more useful—implements of sea combat, notably submarines.

There are opportunity costs to vesting the navy with national dignity and pride.

Herwig’s phrase helps capture the dynamics at work within Russian decision-making circles today. During the Cold War the Soviet Union made itself into a seafaring power of considerable repute. Moscow has made recovering Russian grandeur its project. To make good on that project, it must preserve and rebuild the nation’s nautical reputation—including through naval aviation. The leadership, in short, may make fleet-design decisions that make little sense from a strategic or budgetary standpoint.

A word in parting. Granted, Russian leaders are acutely concerned with restoring luster to the Russian Navy’s reputation, and thus obsessed with their luxury aircraft carrier. But it is far from uncommon for national leaders in any country to entangle national honor with weapon systems. The closest American analogy to the Kuznetsov would be deciding to extend the lifespan of the nuclear-powered flattop USS Nimitz into the indefinite future.

Nimitz represented the state of the art when it debuted in the 1970s; like Kuznetsov, it bears a great name. It would seem that similar logic could prompt presidential administrations to keep the ship around past the fifty-year service life the U.S. Navy hopes to wring from it. Would any administration do that? I doubt it. But think about new U.S. Navy platforms that have sucked up inordinate resources—littoral combat ships, the F-35C joint strike fighter, the next-generation carrier USS Gerald Ford.

Pentagon chieftains clung fiercely to these programs even as their woes mounted. Like Admiral Kuznetsov, each program is the only show in town for a particular mission. And, just as Moscow has done with Kuznetsov, Washington has staked its reputation—and credibility as a world-straddling sea power—on making these programs work. Strict strategic and budgetary logic may not rule the day in either capital. That’s worth pondering before we make sport of Kuznetsov and its crew for their fate.