Why Russia Loves Rocket Artillery Weapons (And Ukraine Hates Them) 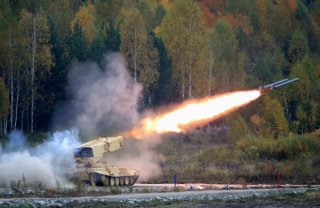 Here's What You Need to Remember: Recent Russian activity in eastern Ukraine and Syria has included the use of artillery rockets, even more so than traditional gun tube artillery systems. Russian Ground Forces and their proxies have not only operated rocket artillery systems, but paired them with unmanned aerial vehicles for spotting purposes.

Russian activity in eastern Ukraine and Syria over the last few years has included the use of artillery rockets, even more so than traditional gun tube artillery systems. Russian Ground Forces and their proxies have not only operated rocket artillery systems, but paired them with unmanned aerial vehicles for spotting purposes. Ukrainian army troops have reportedly identified certain types of drones whose appearance inevitably foretells rocket artillery strikes from Russian and Russian-allied forces. The Syrian Arab Army operates Grad rocket launchers and is believed to have received Smerch systems in 2014, likely from Russia. TOS-1A and Grad have also been used by the Syrian and Russian Armies in Syria, and by antigovernment rebels in Ukraine. Any country finding itself in conflict with Moscow, or its client states and proxies, now or in the near future, will likely find itself on the receiving end of Russia’s deadly artillery rockets.

Kyle Mizokami is a defense and national-security writer based in San Francisco who has appeared in the Diplomat, Foreign Policy, War is Boring and the Daily Beast. In 2009, he cofounded the defense and security blog Japan Security Watch. You can follow him on Twitter: @KyleMizokami. This first appeared in April 2017.