Why Russian Corruption in Post-Soviet States Matters to the West 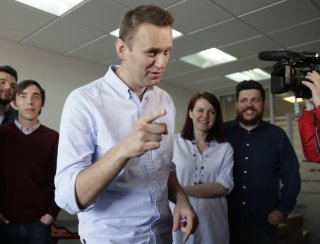 Here's What You Need to Remember: Russia’s current attempts to influence the political environment in Moldova must be viewed against the backdrop of Moscow’s efforts to encircle and enfeeble Ukraine. In addition to seizing Crimea and invading eastern Ukraine, Moscow is interfering with Ukraine’s access to the Black Sea and the Sea of Azov.

The recent conversation between President Donald Trump and Ukrainian President Volodymyr Zelensky has generated renewed interest in the fight against corruption in the former Soviet Republics (FSRs) and Moscow’s erstwhile allies, often referred to as post-Soviet states, in Europe. Almost from their first days as independent nations, corruption has been a major problem for these countries. It has weakened their economic performance, legal systems and political legitimacy. It complicates the ability of the FSRs to participate in European institutions such as the European Union and NATO. Equally important, corrupt practices have created an avenue for outsiders, particularly Russia, to undermine fragile institutions, blackmail leaders and influence political processes. In many ways, fighting corruption in the FSRs and Eastern Europe is as important to the security of NATO as strengthening their ability to resist overt military aggression.

It was all but inevitable that the FSRs and those countries of Eastern Europe that had once been under Soviet domination would suffer from chronic, even endemic, corruption. In the Soviet era, the law and governmental institutions had always been subordinate to party politics. There was no effective separation of powers, independent judiciary or free press. Transparency was an unknown word. The “gold rush” environment that occurred in many countries as their economies privatized made it all but inevitable that favors would be traded for new-found riches. Public anger over the enriching of a few with special access and the creation of extreme income inequality also discredited newly-created governments.

According to a recent report by the Organization for Economic Co-operation and Development, “Corruption is the main challenge to the democratic development of post-Soviet states.” Corruption does more than merely sap the economic energies of countries struggling to establish themselves in a global capitalist marketplace. It undermines nascent political institutions, weakens the rule of law and corrupts the political process.

With respect to Russia itself, corruption seems to have won out. Numerous Western experts and governmental institutions characterize the Russian political system as a kleptocracy. This constitutes a serious domestic political weakness for the Putin regime. One way in which Moscow seeks to shore up its domestic political legitimacy and neutralize accusations of corruption is by spotlighting corrupt practices in the post-Soviet states and the West.

Corruption is a primary avenue for malign foreign interests to influence the governments and politics of post-Soviet states. It is even a powerful means for undermining their stability. Russia has been accused of “weaponizing” corruption as a part of its approach to hybrid warfare, exporting corrupt practices in order to further its geopolitical ends. In 2015, then-Vice President Joe Biden explicitly accused Russia of employing the tactics of corruption in its war on Western political institutions, saying, “The Kremlin is working hard to buy off and co-opt European political forces, funding both right-wing and left-wing anti-systemic parties throughout Europe.” In an era of renewed great power competition, the fight to root out corruption not only in the post-Soviet states but globally has taken on serious strategic importance.

In Ukraine, the fight against corruption has become inextricably linked to the great-power struggle to place that nation in one camp or the other. Ukraine’s interest in becoming part of the West threatens Moscow’s dream of again becoming a great power. Should Ukraine be successful in tying itself to the West, in part by reining in corruption, it also will pose a challenge to Russia’s kleptocratic political system. Moscow is seeking to use every weapon at its disposal, including weaponized corruption, to prevent Ukraine from achieving desired reforms.

Another country where Russian hybrid warfare efforts, including buying political influence, are creating strategic consequences for Europe and NATO is Moldova. Nestled in southeast Europe, between Romania and Ukraine, Moldova has long been a pawn in Russia’s efforts to recreate the Soviet empire. Moscow has supported the separatist regime in the Trans-Dniester region of Moldova, deploying Russian troops there in the early 1990s.

Russia’s current attempts to influence the political environment in Moldova must be viewed against the backdrop of Moscow’s efforts to encircle and enfeeble Ukraine. In addition to seizing Crimea and invading eastern Ukraine, Moscow is interfering with Ukraine’s access to the Black Sea and the Sea of Azov. On Ukraine’s northern border, Moscow is working hard to turn Belarus into a satrapy. By controlling Moldova, Moscow will have achieved the virtual encirclement of Ukraine.

Moldova is now on the front line of the struggle between Russia and Europe. There is a battle for the future of Moldova between the ruling Democratic Party and its leading figure, Vladimir Plahotniuc and the pro-Russia Socialist Party which supports the current pro-Putin President Igor Dodon. Plahotniuc is a businessman who, along with the current prime minister, Maia Sandu, has sought to cement Moldova’s ties to the West, particularly the European Union. Dodon has made no secret of his pro-Russia leanings. He has even encouraged his government to shed its ties to the EU in favor of closer relations with Russia.

Russia has repeatedly sought to intervene in Moldovan affairs for the clear purpose of trying to draw that country into Moscow’s orbit. Russian money flooded into Moldova ahead of that country’s parliamentary elections earlier this year. Russian electronic propaganda is continuously beamed into Moldova. Beyond that, Moscow has manipulated the international legal system for its own ends, accused Plahotniuc of money laundering and even drug trafficking without any evidence of said crimes. Plahotniuc was forced to flee his homeland to avoid extradition to Moscow.

Moldovan politics are of more than just local interest. Should Moscow succeed in its efforts to make Moldova in effect a satellite, Ukraine will be further geographically isolated from the West. In addition, Moscow will be encouraged to try harder to subvert the independent political processes in other post-Soviet states.