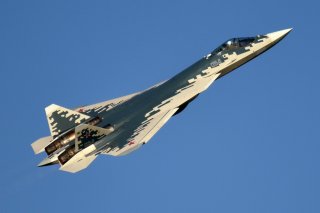 Here's What You Need to Remember: In light of the difficulties the Su-57 program faces, the purported second Syria deployment likely achieved as much as the 2018 deployment did. Nothing much.

David Axe serves as Defense Editor of the National Interest. He is the author of the graphic novels  War Fix, War Is Boring and Machete Squad. This first appeared earlier this year and is being republished due to reader interest.