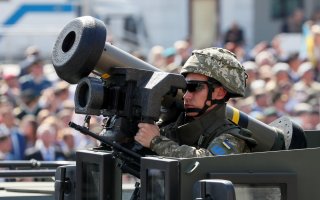 Here's What You Need to Know: The Javelin missile is a truly potent system on the ground.

Still, the infrared-guided Javelin has proven itself in combat in Iraq, Afghanistan, and Syria and has reliable shtick that should work on virtually any tank out there—it hits them on the weak top armor. It also exposes its crew to less danger than the typical guided missile system. Because it’s such a lightweight system, it may end up being a first responder on the ground to emergencies that could be described as “massive, unexpected tank invasions”—a scenario the U.S. military could have faced during Operation Desert Shield, when it deployed light infantry to defend Saudi Arabia, and currently fears in the Baltics.

The Javelin’s Command Launch Unit—CLU—has a sophisticated infrared sensor with multiple viewing modes, including 4x optical zoom, a 4x green-lit thermal view, and a 12x narrow-vision zoom activated for targeting. The seeker in the missile even provides a fourth 9x thermal viewing mode. The CLU can, therefore, serve as a handy scanning device for the infantry. The thermal viewers on the Javelin need to be cooled off to function well, which theoretically takes 30 seconds, but might take a bit longer if you’re in Baghdad and it’s a breezy 120 degrees at noon. The system also incorporates multiple safeguards to avert or abort accidental launch.

Once the firer acquires a target, locks the infrared seeker on to it and pulls the trigger, the Javelin missile is ejected out of the CLU without using its rocket motor in a “soft launch” creating relatively little backblast. Missile launch back blast not only makes it easy for opposing forces to spot the launcher after firing, but can make launching while inside a confined space (a building) a deadly risk. So the Javelin’s small backblast is very handy for keeping the operator alive. Still, the launch does blowback some gas, so you don’t want to stand directly behind it.

Afterward, the Javelin’s gunner must… actually, the gunner could play Candy Crush on their cell phone if they wanted to, because unlike most long-range anti-tank missiles, the Javelin is a fire-and-forget system and requires no further input after lunch. The Javelin crew is free to duck into cover and concealment, rather than being forced to remain fixed in place guiding the missile towards the target, as is necessary with Semi-Automatic Command Line-Of-Sight (SACLOS) systems such as the wire-guided TOW or laser-guided AT-14 Kornet.

A Javelin fired in this manner will strike the top armor of an armored vehicle, which is generally much thinner than the frontal or even side armor. The Javelin’s 127 millimeter shaped charge warhead is estimated to penetrate the equivalent of 600 to 800 millimeters of Rolled Hardened Armor (RHA), which is not particularly impressive, given that modern tanks now feature composite armor that is extra effective against such warheads. But that doesn’t really matter: it’s still more than enough to penetrate the top armor of anything out there—at least, as long as we don’t consider other defensive systems.

At the time, the United States was not able to deploy troops in Northern Iraq by land, so it instead of air dropped Special Forces and paratroopers that fought alongside Kurdish peshmerga fighters. In the Battle of Debecka Pass, a force of a few dozen Special Forces operators and a larger peshmerga contingent engaged and destroyed an Iraqi mechanized company of over a hundred soldiers. The U.S. force had just 4 Javelin launch units. Nineteen Javelins missiles were fired, seventeen of which hit, destroying two T-55 tanks, eight MT-LB armored personnel carriers, and several trucks. Reportedly, all of the Javelins shots were made at 2,200 meters range or further—close to or exceeding the official maximum range of the weapon—and one hit was even reported at 4,200 meters.

Javelins knocked out several more tanks during the Iraq War, including Type 69 tanks and Lion of Babylon T-72s, none of them cutting edge types. As the conventional phase of the conflict ended, the Javelins main duty soon came to ‘sniping’ smaller, softer targets. The Javelin’s precise targeting scope was ideal for spotting and taking out at long ranges insurgent heavy weapons teams armed with machine guns, missiles, or recoilless rifles, as well as the occasional pickup truck. Other weapons systems available to the infantry lacked the combination of long-range and precision.